DCI Jack Robson believes he is hunting a kidnapper…

Away from his posting in London, Robson is asked to lead an investigation in the south west of England.

But what begins as a baffling local kidnapping mystery, quickly escalates into something far more sinister.

In pursuit of the perpetrators, DCI Robson joins forces with Inspector Emma Wilson and the rest of the regional CID team. Together, they attempt to make sense of the lack of evidence or motive, eventually getting drawn to the tiny island of Steep
Holm, in the Bristol Channel.

As the investigation progresses, Robson, Wilson and their colleagues find themselves facing something far beyond normal detective work. Unthinkable connections lead them to a conspiracy, so great it could change the course of humanity. The question is, can they intervene before it’s too late to prevent the appalling future that potentially lies ahead…

This story starts like they are a dime a dozen, but very soon it changes. The more I read, the more I felt like I was being thrown into a James Bond film. I can assure you that this really is very much up my street.

The book is about kidnapping and murder and of course the investigation. I doubt deeply the CID knew what they were in for when they started this case. It was certainly about a lot more than they were hoping to discover. All this and a fastly ticking clock, makes you want to finish the book before you are able to put it away.

I can only recommand it if this is your cup of tea as well. You will not regret it. 4 stars.

Thank you, Jason Minick and LoveBooksGroup.

Jason Minick is an engineer living in the south-west of England. He has a passion for the written word and reading.

Jason is a fan of many genres. His debut novel, Arcam, is a crime/conspiracy thriller set in his favourite part of the UK.

He lives with his wife, Emma, and his three children, Lucy, William and Sophie. The family share their home with two very small dogs, Digby and Tizzie.

The author is currently working on the second book in the DCI Robson series, the sequel to Arcam. 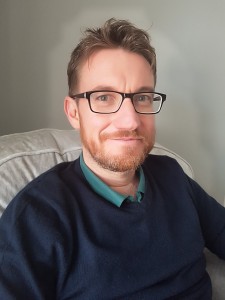