Owen Nicholls’ Love, Unscripted is an uplifting love story, following film projectionist Nick as he tries to understand the difference between love on the silver screen and love in real life. Perfect for fans of David Nicholls, Nick Hornby and Laura Barnett. For Nick, love should look like it does on the big screen. And when he meets Ellie on the eve of the 2008 presidential election, it finally does. For four blissful years, Nick loved Ellie as much as he loved his job as a film projectionist in his local cinema. Life seemed pictureperfect. But now it’s 2012, Ellie has moved out and Nick’s trying to figure out where it all went wrong. With Ellie gone and his life falling part, Nick wonders if their romance could ever be as perfect as the night they met. Can love really be as it is in the movies? 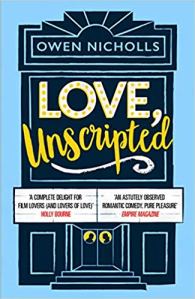 I first met Ellie at a 2008 election night party held by a mutual friend of ours who just happened to be a libertarian. Normally I would baulk at being near anyone who would describe themselves as such, but Tom had a big house, good weed and an encyclopedic knowledge of Asian cinema. That he was the only person in south London who wanted John McCain to win wasn’t quite enough to counter these excellent qualities, and the fact that he’d only invited thirty or so twenty-somethings, who were all sane non-libertarians, was

typical of him. He hated people agreeing with him, loved confrontation and would almost exclusively start arguments with the phrase ‘I’m just saying’.

He addressed a crowd of five.

‘I’m just saying, you lefties all fawn over Obama, but policy for policy he has more in common with Cameron than Brown.’ A clueless twenty-something in a beanie hat took the bait. ‘So you want another four years of the same regressive Republican agenda that took the UK into two wars?’

Ellie entered my life half watching David Dimbleby informing us the polls for Kentucky, Indiana and Georgia would close in forty-nine minutes, and half watching Tom take on the hipster. A wry smile crossed her face; she knew full well what he was doing. It was that smile that got me. I’m a sucker for any kind of smile, but a wry one just floors me.

Her smile was one of the first things I remember really liking about Ellie. The second was the way she tucked her hair behind her ears. There was a surety in the action. Maybe it was because as a teenager I was teased about my sticky-out ears. I even grew long hair to cover them. To see someone purposefully putting theirs on show made me want to yell out, ‘Good for you!’

That in a certain light she looked like Holly Hunter when Holly Hunter was in her mid to late twenties – so Broadcast News-era Holly Hunter – certainly didn’t inhibit my attraction. They shared the same quizzical eyebrows and flawless skin. Plus, she had Kate Winslet’s neon-red hair from Eternal Sunshine of the Spotless Mind and wore the most nondescript zipped-up grey hoodie and navy jeans, like she was paradoxically trying not to be noticed yet screaming, ‘Look at me!’

It took me forever to make my move. I became paranoid I’d been staring at her and she’d noticed and was now wondering who this weirdo creep with massive ears and . . . Wait . . . were we wearing the exact same hoodie?

I grabbed two beers from the kitchen and went for it, handing her one and observing, ‘You must have seen Tom do this before to smile like that.’

She squinted slightly, viewing me with the requisite amount of scepticism with which you should view someone who comments on your smile, and took the drink.

‘He certainly has a need to be disliked,’ she said, elongating the vowels in ‘need’ – an Elliesque idiosyncrasy I have since found both adorable and infuriating in equal measure.

Tom was obliterating his foe with a smile in his eyes. I could see where this was heading and gave my insight to Ellie.

‘If that guy mentions hope or change, he’s done for.’

‘He’s good,’ she said in a way that made me a little jealous, again bringing several extra vowels to the word.

‘He almost convinced me to join his anti-tax group when we were at university,’ I said, stopping for a sip. ‘Before I remembered I like roads and hospitals and libraries and that

I’m not an arsehole.’

‘Is that where you know him from? University?’

‘Yeah. You? You’re not part of his anti-tax group, are you, because if so, I didn’t mean the thing I said just then about them all being arseholes.’

She let out a short, sharp laugh, her brown eyes twinkled and my heart soared.

She followed the laugh with ‘I’m tempted to say yes to see how quickly your principles fly out the window.’

‘So why this one? Why are we all so besotted with this guy?’ I hadn’t contemplated until that very moment why we were all (except Tom) so excited at the prospect of Barack Obama becoming the 44th president of a country the vast majority of us had no actual affiliation with.

‘First of all, it’s him,’ I said. ‘He has an allure. An allure so strong that a straight male from the south of England can say “he has an allure” without even pausing to wonder why he’s using such a romantic word.’

At this Ellie flashed a grin that blew the wry smile clear out of the water.

I continued, spurred on by the grin. ‘But I’ve always loved American politics. It’s what America pretends to be that’s appealing. Truth, freedom, liberty. All that jazz. In a country that’s still sort of young . . .’

She looked deep into my soul and offered, ‘The possibilities are endless.’

Owen Nicholls is a screenwriter with a Masters in Scriptwriting
from the UEA. His work has appeared in Empire and NME, and
earlier this year Love, Unscripted was selected for the Escalator
Scheme run by Writers’ Centre in Norwich. 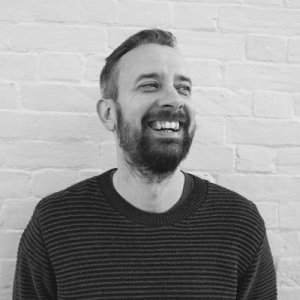