Constructed of stone and packed earth, the Great Wall of 10,000 li protects China’s northern borders from the threat of Mongol incursion. The wall is also home to a supernatural beast: the Old Dragon. The Old Dragon’s Head is the most easterly point of the wall, where it finally meets the sea.

In every era, a Dragon Master is born. Endowed with the powers of Heaven, only he can summon the Old Dragon so long as he possess the dragon pearl.

It’s the year 1400, and neither the Old Dragon, the dragon pearl, nor the Dragon Master, has been seen for twenty years. Bolin, a young man working on the Old Dragon’s Head, suffers visions of ghosts. Folk believe he has yin-yang eyes and other paranormal gifts.When Bolin’s fief lord, the Prince of Yan, rebels against his nephew, the Jianwen Emperor, a bitter war of succession ensues in which the Mongols hold the balance of power. While the victor might win the battle on earth, China’s Dragon Throne can only be earned with a Mandate from Heaven – and the support of the Old Dragon.

Bolin embarks on a journey of self-discovery, mirroring Old China’s endeavour to come of age. When Bolin accepts his destiny as the Dragon Master, Heaven sends a third coming of age – for humanity itself. But are any of them ready for what is rising in the east?

I really enjoyed writing The Old Dragon’s Head. I loved creating the characters – Bolin, the young apprentice wizard, Luli, the local seer, Feng, searching for his true identity, Altan, the Mongol shaman with mysterious supernatural powers, to name but a few.

I also loved researching and writing about the faraway and unusual location.

The Old Dragon’s Head is a real place situated at the far eastern end of the Great Wall of 10,000 li. The wall snakes over mountains and valleys, across deserts and through forests, until it finally meets the Yellow Sea in north-east China. Not only that, the Chinese believed that the wall was occupied by a numinous dragon that would rise up in times of crisis and defeat their northern enemies.

In 1368, the enemy was the Mongol. In that year, a Chinese army led by Zhu Yuanzhang had ejected the Mongols from China and Zhu founded the Ming Dynasty.

At the time, the eastern end of the Great Wall stopped in the Yanshan Mountains, leaving a land corridor about 6 miles wide from the foothills to the Yellow Sea.

In 1381, the new Emperor was anxious about Mongol incursion through the corridor, so he ordered the construction of the fortress of Shanhaiguan, which means mountain-sea pass.

Shanhaiguan is no ordinary fortress. It garrisoned 40,000 troops. Made of rammed earth, it’s surrounded by moats and rivers. Towers and gates marched along walls up to 40 feet high and 35 feet wide.

But it’s more than an imposing physical obstacle, because like all Chinese buildings it’s harmonised to the surrounding landscape according to the principles of Feng Shui. For example, the fortress is perfectly aligned to the points of the compass.

Just beyond the fortress is the Laolongtou, which means Old Dragon’s Head. Mind you don’t disturb him, he’s taking a drink from the cooling waters of the Yellow Sea.

The fortress of Shanhaiguan and the Laolongtou provide the extraordinary setting for my novel, The Old Dragon’s Head.

After a long career in I.T., Justin’s love of literature finally seduced him and, in 2006, he found his way to the creative keyboard to write his first novel.

Justin writes secret histories in which historical events and people are guided and motivated by numinous and supernatural forces.

His debut novel, The Genes of Isis, is a tale of love, destruction, and ephemeral power set under the skies of Ancient Egypt, and which tells the secret history of the human race, Homo Sapiens Sapiens.

His second is The Old Dragon’s Head, a historical fantasy and supernatural thriller set during the Ming Dynasty and played out in the shadows the Great Wall of China. It explores the secret history of the influences that shaped the beginnings of our times.

He is currently working on a novel set in East Prussia during the Enlightenment in the 18th Century which reveals the secret history of perhaps the single most important event of the modern world – The Industrial Revolution.

Justin does books signings and gives author talks in libraries in South West England. He has appeared at many Literary Festivals, including Bristol, Weston-super-mare and Exeter. He regularly gives interviews on BBC local radio and local FM radio stations. 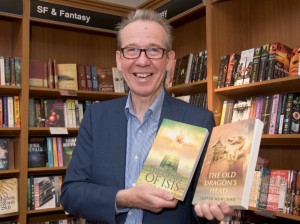