Devastated by a divorce and death of a child, Torie Van Fleet rebuilds her life around succeeding in the justice system. Her goal is to work her way to the U.S. Supreme Court. Vowing to do whatever it takes, she risks her relationship with her new husband by refusing to bear him a child. Further, she jeopardizes her friendship with her best friend by competing with her for the first major hurdle toward her goal, appointment to the Texas Supreme Court after the sudden death of one of the justices.

Not until she realizes what her backers demand of her does she understand what an exorbitant price she must pay to reach her dream. Will she risk everything, come to terms with her priorities, or does she even have a choice? 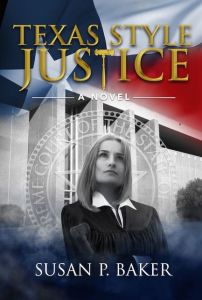 My English war bride mother was a real penny pincher, but in the early years of their marriage, my parents had to pinch pennies. Not long after my mother arrived in the U.S., she encouraged my father to complete his education. He used the GI Bill to obtain a law degree while she was having four babies and working part time doing such odd jobs as collecting the money out of coin-operated machines in washaterias.

We moved to Galveston when I was four, which is when my father claimed he taught me to read. We lived on the water, swimming, fishing, and crabbing in Offatts Bayou. As far as I can remember, we had no purchased books in our house when I was growing up. We didn’t have the money. But Mom took the four of us to the Rosenberg Library every two weeks where we’d check out the maximum number of books allowed, six each. We even took library books on vacation with us so we could read them in the car instead of fussing and constantly asking, “Are we there yet?”

I wanted to be a writer when I grew up. I used to write little stories as well as entertain my invisible friend, Sally, who lived in my side of the closet. My parents discouraged me from seeking a writing career, so after several false starts I eventually obtained a BS in Criminal Justice.

I finally was hired as a Probation Officer about a week before I started law school. I was married with a couple of kids of my own by then, so I worked and attended Law School (in Houston) for three years.

I mostly practiced criminal and family law. In fact, I was board certified in family law. After eight years of practicing law, I ran for district court judge and was elected. I was the first woman in Galveston County to run.

By that time, I was writing a lot. I’d published My First Murder. I’ve moved away a couple of times but I’m retired now and back living in Galveston.

People often approach me with ideas for books, but with a background like mine, I have no shortage of my own.