Sylvie never called them ghosts, but that’s what they were—not that George ever saw them herself. The new girl, Sylvie, is like a creature from another time, with her old-fashioned leather satchel, her white cotton gloves and her head in the clouds. George watches her drift around the edge of the school playing fields, guided by inaudible voices.

When George stands up for Sylvie, beating back Tommy Payne and his gang of thugs, it brings her close to the ethereal stranger; though not as close as George would have liked. In the attic of Sylvie’s father’s antique shop, George’s scars will sing and her longing will drive them both toward a tragedy as veiled and inevitable as Sylvie’s whispering ghosts. 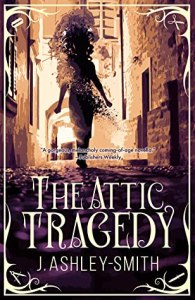 Everywhere. I’m never without a book to read and a book (or books) to write in. Leaving the house is always a slightly painful experience for me, as I can never be sure what I’m going to feel like reading, so I load my backpack full of books and notebooks before I pack anything else. I’ve never connected with reading electronically, so this can lead to a very heavy bag! If it was a choice between books and clothes, I’d walk around in my underpants with a book in each hand.

That would depend on the book. The kind of stories I like most are the ones where the lines between good and bad are so blurred as to be indistinguishable. I think that, rather than being either the ‘good one’ or the ‘bad one’, I would prefer to be Tuckerised as the ‘one that dies horribly in a scene so disturbing that readers fling the book into the corner of the room in disgust.’

As parent of two boys whose hyperactivity would put the Energizer bunny to shame, the moments I get to read uninterrupted are few and far between. Mostly, I read late at night, on the couch, with the dog on my legs, trying to slow my brain down enough to go to sleep.

I listen to a lot of audiobooks, too, which opens up new times in the day for reading. Household chores like hanging out the washing, cleaning the kitchen, folding laundry, present the perfect (albeit unromantic) opportunity to listen to many books.

You can’t. In those few short hours, I’m trying to squeeze in enough sleep to resemble a functioning human being. The door is locked. The covers tugged up over my head. I’m unfindable.

Seriously? Not only can I not pass a bookstore without going inside, I can’t enter a town of any size without first checking whether or not it has a bookshop. And, it goes without saying, I can’t leave a bookshop emptyhanded – it would be like leaving the pound without a puppy. Just think of all those lonely books, pining for a home…

Raising kids that love to read. Nothing makes me feel less of a failure as a parent than seeing either of my boys lost in a book.

While I’ve had stories in print anthologies – and the excitement of getting author copies in the mail just never grows old – The Attic Tragedy will be the first book of my own. It comes out next month and I don’t have my copies yet, so… I’ll have to get back to you about that one.

The work itself is the thing: it is the means and the end and its own reward. Everything else is superfluous, so don’t get distracted. Just do the work. Don’t quit.

And be kind – to yourself, and to those you meet along the way.

The thought of meeting my heroes fills me with a kind of pathological dread. I imagine I would become utterly tongue-tied and incapable of asking or saying anything but the most dreadful banalities. Worse still would be to meet them and be confronted by their flawed humanity, to find out they were never as heroic as I had built them up in my mind to be. Better to admire them from the safe distance of my imagination – or watch them with binoculars as I rummage through their garbage bins.

Did I mention I have children? Their existence (no matter how wonderful) means I have zero say in when I get to write. The only possible time is when they are asleep, either late at night or early in the morning. Where? I have a perfectly respectable desk, but always seem to end up in a heap on the couch with a dog and a laptop.

J. Ashley Smith is a British–Australian writer of dark fiction and other materials. His short stories have twice won national competitions and been shortlisted six times for Aurealis Awards, winning both Best Horror (Old Growth, 2017) and Best Fantasy (The Further Shore, 2018).

He lives with his wife and two sons in the suburbs of North Canberra, gathering moth dust, tormented by the desolation of telegraph wires.