Jeremiah Ward was just another convict, a disgraced investigator who once worked the
Martian beat, now serving his sentence in a mining colony on Mercury. When a member of
a powerful faction goes missing on Titan, Ward is given an opportunity he cannot pass up. In
exchange for investigating the disappearance of this figure, he gets a clean slate and a
second chance.
But, the deeper Ward digs the more secrets he finds. Instead of investigating a missing
person’s case he becomes embroiled in a centuries-old conspiracy and Ward comes to
realize his one shot at redemption may cost him his life. 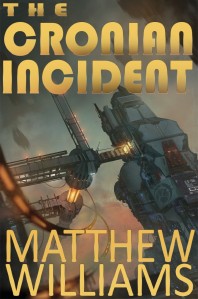 Growing up in the 80s and 90s Matthew Williams was born in to science fiction. He enjoyed
many of the infamous SF franchises of the time and read many of sci-fi’s most influential
works. As an adult, Matt marvelled at those SF novels which stood the test of time, while
making valuable observations of the human condition, and he decided to create his own
novels.
As a professional writer for Universe Today, Matt is well-versed in many nerdy topics
ranging from: spaceflight to terraforming, Earth sciences to physics, and the future of
human space exploration. He has interviewed many of today’s top scientific minds and
NASA personnel, and been a featured speaker at astronomy societies. His articles have
appeared in such publications as Business Insider, Science Alert,
Phys.org, HeroX, Pionic, Gizmodo, Futurism and IO9.