The Collective military has spent its years destroying the last remnants of The Hive, an alien force that devastated the old world. bringing forth the apocalypse, and ushering a new age of warring factions.

Alexander King is a Collective soldier who during a mission monitoring the outskirts of Zone 6, discovers evidence that the Hives presence is stronger then commonly believed. With his new information it becomes vital that The Collective acts fast, for if they don’t the world will be brought to its knees again in a wave of destruction that will end humanity forever. 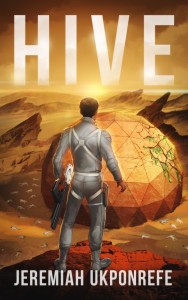 Jeremiah Ukponrefe is a Vancouver based author and stand-up comedian. He has written articles for The Runner, and The Reel Anna. His debut novel Hive is releasing January 2021. As a comedian his style is a mixture of clever observations with a subversive darkness, all performed under a veil of innocence. He has performed in the Comedy Ring, Rick Bronson’s House of Comedy, and Yuk Yuks. He is really hoping this art thing works out.