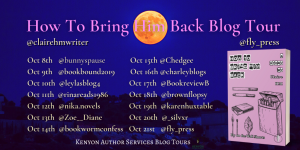 If I was going to cast a spell tonight, this night of a full arse moon as stark and crunchy as a ten-day crust of snow, I’d start by telling the earth to spin in the opposite direction. By what power? By the power of my pen.

It’s 90s Birmingham and post-university, but Cait’s aspirations haven’t taken her far from her council estate beginnings. Living in a bedsit and working in a bar, she’s caught between two best friends: Stadd, who’s stable, funny, compatible as a friend, and her compulsive sexual attraction with Rik. Present day Cait picks up her pen, on her yearly writing retreat to the sea, and discovers she’s finally ready to conjure an absent Stadd with an apology based on the lessons she has learnt from her chaotic past. 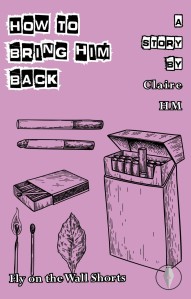 It’s no surprise that the queue outside Snobs stretches around the corner. Same old. Cait hadn’t been expecting to be out-out, so over the lacy cami top of her black dress she is at least wearing the thick black parka she bought for Aber.

She’s so quiet, Stadd asks if she’s okay. She reminds him that she’s been working, not drinking, and she needs a bit of time to warm up. It’s the sort of lie that’s entirely plausible because even Cait hasn’t admitted what she’s thinking. There’s a fizz in her blood, and she can’t hear herself think above its crackle.

The weak yellow light of the club’s signage plunges the queueing bodies into a different shade of darkness. Stadd shouts out at one of the shadows.

“Hey, fuckwit, are you letting us in the queue or what?”

Cait’s eyes are drawn to a figure, shoulders rolled forward, shuffling from foot, and as her eyes adjust to the grey the figure is drawn out from the shadows. No coat. White t-shirt pulled over a tight chest. Dark curtained hair flopping over a tanned face.

“Stadd, man…” and stumbles a step towards them.

Cait can see his face clearly now, just as his sloppy brown eyes peek towards her and he says her name. She murmurs a reply, without forming any words in particular. She feels her hand firmly in Stadd’s.

“Parking up the car, mate.”

“Heh. You know how country singers pay for their condoms? With Johnny Cash.”

“Stadd, man, I’ve hardly even started. Anyway, where have yous two been?”

Cait knows that Rik is looking at her, can feel that familiar sense of him taking her in that makes her queasy but, yes, excited.

“I didn’t see you behind the bar.”

There’s a pause for Cait to fill, and when she doesn’t, Stadd replies.

“I’m not at the Pot now, Rik. I’m working somewhere else.”

And before Rik can crack any further into where Cait actually is working now, Stadd interrupts.

“Tight cunt probably wants you to pay for his parking. I told him to piss off.”

“I’ll go tell him where to stick it.”

As Stadd tries to loosen his fingers from Cait’s, she holds onto them, says she’ll come with him. But he doesn’t want her to.

As Stadd makes his way towards Diggy she’s left with Rik. This one-to-one she’s been trying to get from him all month, just delivered into her lap now, without trying.

And what the hell would there be to want in this staggering mess, anyway? And yet there’s that lurch of the stomach again. Please let it be disgust.

He’s stopped staggering. In the year that she’s known him he’s moved from Kurt Cobain cardigans to some type of Gallagher swagger. Hasn’t every other fucker in the queue done the same, though? He pushes his hair out of his eyes and Cait sees that his fist is grazed and splattered with fresh red bruising.

Cait turns away from Rik. If she doesn’t say anything, she can’t say anything wrong. Instead her eyes follow Stadd approaching Diggy. Diggy with his vintage waffle cardigans and Ben Sherman shirts. His Adidas gazelles. Yet the poor bugger still looks a balloon with a blonde Brylcreemed slick-back. She very much doubts whether anybody had wanted to get close enough to rot his knob. Probably more like antibiotics for impetigo of the armpit.

She shrugs at Rik. He smirks and replies.

“I suppose I’ve seen you with worse than Stadd. What about that big spider hair guy?”

“Don’t be such a fucking racist, Rik.”

She sees that Stadd is holding out a handful of change in front of Diggy. Didn’t he just say he wasn’t going to give him any cash? So she’s not the only one who acts one way in front of Rik, and closer to a decent human being when he’s not up close. She hates that when Stadd is talking to Rik she can’t even make out their voices apart.

Rik is waving his battered hand in her face now.

“So this was fun to go to work with today? Fending off the wise cracks from the knuckle-dragging fucktards.”

“Where are you working now?”

“That construction site at the top of the Vale.”

“And why do you think I’m interested in your hand?”

Diggy has turned back towards the car park, a huge metal cage with the charm of an upturned trolley stuck in a canal. Stadd is making his way back to the queue. Rik won’t stop talking.

“Are you fucking kidding me, Cait? If you’re not with Stadd then you were doing a pretty good impression last night. Tonight, even.”

Cait’s still watching Stadd making his way to her. A girl at the back of the queue taps him on the shoulder as he walks by her. She’s the sort of girl who doesn’t know to grow out her long bob to stop looking like a mushroom, who doesn’t even know to spray down the stray frizzy bits of hair. Stadd nods at the girl with a weak smile and walks another step. But the frizzy mushroom pulls at Stadd’s coat sleeve and so he stops and turns towards her. Cait becomes vaguely aware that Rik’s still talking at her and flicks her eyes back towards him.

“Cait, are you listening? I said my parents are going to chuck me out when they find out you’re pregnant. It’s only a matter of time, isn’t it? Are you definitely pregnant?”

As her eyes grow more accustomed to the dim light, she sees how knackered Rik looks, dark circles ringing his eyes. His jaw is slack like it’s too much effort to bring his pouty little lips together. Cait’s hands fall to her stomach. She can’t decide whether to suck it in or stick it out.

“It’s about time all you man babies left home, anyway.”

This vow not to reply to Rik isn’t going as well.

“Very mature. And does Stadd know you’re up the duff?”

“I don’t know, Rik. Maybe there’s not been time to talk about it yet.”

Cait’s too distracted to play with Rik anymore; even though he carries on talking at her somewhere at the edge of her awareness, his voice is low and grumbly and not hard to tune out. She’s too distracted by the frizzy mushroom as she chats to Stadd, one arm resting on his, the other flailing around.

Claire HM is a fiction writer, poet and teacher based in (and writing about) her home city of Birmingham. In 2018 she had an essay published in the anthology, I Wrote it Anyway, about her experience of accessing university and the long journey of finding the confidence to write as a woman in her forties from a working-class background. Her work is now published in a growing number of literary publications, including Tears in the Fence, Magma, The Rialto, streetcake, Coven Journal and in Cape Magazine. 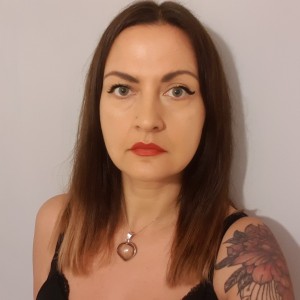