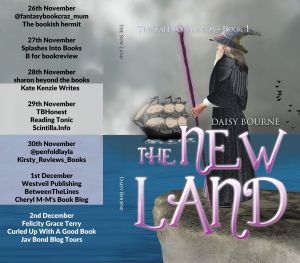 Book 1 in the Tales of Avalon series

What happened to Arthur, King of the Britons, after he was allegedly killed on the battlefield? Legend has it that Merlin, the mighty sorcerer, put the king’s body in a boat and set it sail for a mysterious place called Avalon. However, many Britons refuse to accept that Arthur was really dead. Instead they believe that Merlin had taken the king to a place of safety. There have been many theories as to the whereabouts of Avalon, but none proven to be accurate. The New Land is the first book in the Tales of Avalon series. It tells the story of how Arthur, magical beings, and other Britons, fearing for their lives, seek refuge in a far-off land. They hope their new home will be a place where magical beings and humans can live together in peace and harmony. Will the travelers find the new life they so desire? The Avalonians soon find that they have to form new and unusual alliances in order to protect themselves against an unexpected enemy.

Daisy Bourne was born in England, in 1917. Nothing much is known about her real parents, except that their lives were changed dramatically by the First World War. At the age of six, Daisy was unofficially adopted by a farmer and his wife. They changed her name and took her to Canada. There are several similarities between the real Daisy Bourne and her namesake in this book. To a small child, Canada, with its heavy snowfalls, huge forests, and grizzly bears, must indeed have seemed like some kind of new world. Although Daisy loved Canada and the farm on which she lived, she was not happy and ran away. She returned to England at the age of 16. In later life, she took up farming again. She also enjoyed her garden and preserving much of its produce. This is where the similarities between the real Daisy and the character in this book end. I am proud to use my mother’s birth name as a pseudonym when writing the Tales of Avalon series. My ambition is to one day write the story of the real Daisy Bourne. In the meantime, I shall work to complete the other seven books in the Tales of Avalon series