Wren is impulsive, curious, and always in trouble. Can her flaws become her greatest asset?

Wren Sterling has a problem. She knows she’s super smart and a good friend, but no matter how hard she tries, she can’t shake her reputation as a troublemaker. It feels like the only people who believe in her are her three best friends in the Renegade Girls Tinkering Club. She’d hoped middle school would be different, but when her inability to control her temper causes an accident, even her beloved STEM Club is no longer a safe haven.

She has to find a way to fix it. When her idea to start a business inventing and selling spy gadgets succeeds, it looks like she’s finally done something right! But then the Club is accused of a crime. Can they use their own gadgets, and a little bit of trouble to solve the mystery? If they can find the real culprit, Wren may just discover she has a bright future after all. If they can’t, she could lose her best friends forever.

Build your own SPY GADGETS! Instructions included in this charming story about friendship, middle school, and the Engineering Design Process for kids ages 8-12. 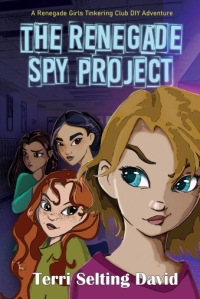 In 1996, Terri left Colorado, where she grew up, and headed even more West until she couldn’t get any West-er. Landing in San Francisco, her career spanned more than a decade in 3D character animation for video games, films, television shows, and even a comic book (but mostly video games.) Her work encompassed character animation, art direction, and story development before she had children and, imagining a better world for them, co-founded the Renegade Girls Tinkering Club with her friend Vicky in 2015. Since then she’s created over a dozen curricula and assisted in creating half a dozen more, encompassing more than 230 individual projects.

She lives in San Francisco with 2 rowdy children and a fabulous, brilliant husband who brings her tea every night.