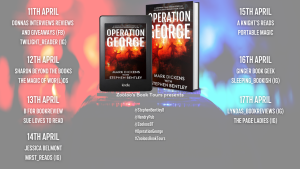 Meet the real Line of Duty ™ undercover team in this previously untold and gripping story of how a Northern Irish terrorist and murderer and one of his followers, were caught in an audacious and brilliantly executed undercover sting on the English mainland, codenamed, Operation George.

In 2006 at Belfast Crown Court, William James Fulton, a principal in the outlawed Loyalist Volunteer Force, was jailed for life and sentenced to a minimum of 28 years after the longest trial in Northern Ireland’s legal history.

Fulton was an early suspect in the Rosemary Nelson killing. Following the murder of the prominent human rights lawyer, he fled to the United States and, with help from the FBI in collusion with the British police, he was deported. On his arrival at Heathrow, Fulton ‘walked through an open door,’ a Lewis Carrol-like euphemism for an invitation created by the covert team, only to disappear ‘down the rabbit hole’ on accepting the invitation.

That ‘rabbit hole’ led to an alternative world: an environment created and controlled by the elite covert team and only inhabited by the undercover officers and their targets. The subterfuge encouraged the terrorist targets into believing Fulton was working for a Plymouth-based ‘criminal firm’ over a period spanning almost two years. In that time, over fifty thousand hours of conversations between the ‘firm’ members were secretly recorded and used to bring the killer to justice.

This unique story is told by former undercover officer Mark Dickens who was part of an elite team of undercover detectives who took part in ‘Operation George,’ one of the most remarkable covert

policing operations the world has ever known. You won’t know him under that name nor the many aliases he adopted as an undercover police officer infiltrating organised crime gangs.

Together in ‘Operation George,’ with pioneering Operation Julie undercover officer and bestselling author, Stephen Bentley, they have written a gripping account of a unique story reminiscent of the premise of ‘The Sting’ film, and the ‘Bloodlands’ setting, combining a true-crime page-turner with a fascinating insight into early 21st-century covert policing. 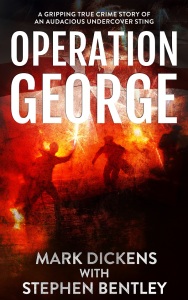 I have an almost daily routine of writing, spending a few hours in the morning and again in the afternoon with a break for lunch before I relax in the evenings.

I write at my desk at home which also serves as my ‘office.’

Yes, absolutely. I know of writers who like to listen to music whilst writing but that’s not for me.

Michael Connelly, every time. I’m sure I would learn a lot from one of my favourite crime writers. However, I did co-write ‘Operation George’ with Mark Dickens, and it was a privilege to do so because his stories are simply amazing.

Bad one, I think. Antagonists can be very interesting. Good can be boring.

Apart from Michael Connelly, I would like to interview Jed Mercurio, the man behind the ‘Line of Duty’ TV series. I’d ask him if he needed any storylines seeing both myself and Mark Dickens are former undercover police officers.

Sitting in the porch outside my home in the Philippines every evening with my Kindle app and a cold beer.

Sleeping in my bed. No, seriously, same place, different cold beer but now watching a crime series on Netflix.

A mixture of thrill and a sense of achievement and a wish it will end up on some bestseller list.

That is a good question. For ‘Operation George,’ it was easy. What else could it have been? For the Detective Matt Deal Thriller series, one of my crime fiction series, I decided to have all the titles with the letter M at the start of a single word. ‘Mercy’, ‘Mayhem’ and ‘Mobocracy’ were born. The latter was a result of a poll on my reader’s newsletter.

I don’t really. I hire professional designers to produce my covers. I give them an idea on any predominant colour and any images I like. They provide genre appropriate fonts and themes for the covers giving me a choice then I pick the final version after seeking feedback from my street team.

Stephen Bentley is a former UK police Detective Sergeant, pioneering undercover cop, and barrister. He is now a freelance writer and an occasional contributor to Huffington Post UK on undercover policing and mental health issues. 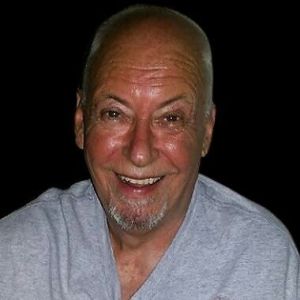