The girl’s head is bent as if in prayer, her hands bound tightly together at the wrist. Her bare feet are still against the cold sand, the last thing she ever felt before she breathed her last…When the body of a teenage girl is found in Rydal Falls’ churchyard, Detective Morgan Brookes abandons her own birthday to attend the scene. In the dim evening light, Morgan can just make out the girl wrapped in a pristine white sheet and is certain she’s been left here for them to find.The autopsy identifies the girl as sixteen-year-old Shea Wilkinson, and Morgan’s heart cracks with sorrow. The beautiful teenager has been missing for weeks, could she have been suffering all this time? When she learns the sand on Shea’s feet is from a nearby island, Morgan leaves immediately, determined to find the killer’s hiding place and stop them in their tracks.But scouring the windswept beach, Morgan can’t find any sign that Shea was ever there. And then her phone rings with devastating news. Another girl has gone missing, a young nurse called Milly with the same blonde hair and blue eyes as Shea.Morgan won’t rest until she has returned the kind, cheerful girl to her distraught parents. But Milly was last seen chatting to one of Morgan’s colleagues on the force… Refusing to think the worst, can she trace the clues and get inside the mind of the most cunning killer of her career, before another innocent life is lost?

I used to read the blurbs of every book before I decided to buy/read them. I stopped doing this a while ago. Why? There are several things to answer this question with. I sometimes find blurbs too revealing. I don’t want half the book told on the back cover. Sometimes I find it too confusing, so I left those on the shelf too.

There is one thing that works for me each and every time and that is the front cover. In the first place it’s the image that has to attract my attention. If that activates something in my brain, it’s a winner. I was never disappointed. If I loved the image, I loved the book. The title  is the second thing I look at. If the image and title are a match made in heaven, I am a happy camper and if the author is a favourite one I do a little happy dance. If the author is new to me, I do a happy dance too. 😊😉

So one look at this book and I was in. A church is often creepy, especially at night and when it’s surrounded by fields and nothingness. And the title ‘Silent Angel’… Well, that says enough. 😊

Last but not least the author. She created an amazing series with Morgan Brookes as one of the main characters and each part is a winner.

Morgan herself is a winner too. Saving victims, catching killers… those are two goals she has to achieve. Putting herself in danger? No problem as long as she can close a case with a positive outcome.

I love the closeness of the small police team. They all have each other’s back. There is one rotten apple though. I had the feeling and hope they would have adapted and fitted in now with the rest of them, but I sadly he does not see the light yet. 😉

Abduction and murder are central in this story, but love and friendship play a big part too.

Morgan Brookes is not a traditional police officer, but you just have to love her. She is great. 5 stars

She lives in the busy town of Barrow-in-Furness surrounded by miles of coastline and a short drive from the glorious English Lake District.

Helen loves reading books that scare the heck out of her and is eternally grateful to Stephen King, Dean Koontz, James Herbert and Graham Masterton for scaring her senseless in her teenage years. Unable to find enough scary stories she decided to write her own and her debut novel The Ghost House released in October 2013 became a #1 Global Bestseller. 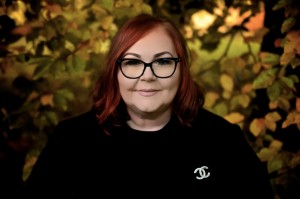