Young American painter Theodora Faraday struggles to become an artist in Belle Époque Paris. She’s tasted the champagne of success, illustrating poems for the Revenants, a group of poets led by her adored cousin, Averill.

When children she knows vanish mysteriously, Theo confronts Inspecteur Michel Devaux who suspects the Revenants are involved. Theo refuses to believe the killer could be a friend—could be the man she loves. Classic detection and occult revelation lead Michel and Theo through the dark underbelly of Paris, from catacombs to asylums, to the obscene ritual of a Black Mass.

Whether deranged mind or demonic passion incite him, the killer must be found before he strikes again.

Theo sighed with frustration. It was growing late. If she left now, there would be time to explore the streets for a possible landscape as well as for tonight’s dinner offering. She would return to the cherry trees in the Bois de Boulogne, but she wanted to find something closer to hand as well. After locking her door, she descended the stairs and went outside, setting off up the street toward the Place du Tertre.

There was a man in the rue de la Mire—not really a street, but a long set of stairs descending the hillside, narrow as an alleyway. Theo watched him for a moment, not sure why he had captured her attention. He didn’t look at all like a bum or a ruffian, but neither was he a workman or businessman going about an errand. He was exploring. But why? She liked his attentiveness, however mysterious, and the way he moved, with economy and grace.

Almost instantly, he was aware of her watching and turned. He paused, then climbed the steps toward her. “Bonjour, mademoiselle.” His manner was serious, his voice low and quiet. “I’m Inspecteur Devaux of the Sûreté.”

“What are you investigating?”

“The disappearance of Denis Armand.”

“Ah, yes,” she said, feeling sadness take hold of her again. She remembered how sweet the little boy was and how grief-stricken his mother. Theo had helped organize one of the many searches for him. “Is there any news?”

“No. I am looking at his neighborhood again. He would have passed this way on the night he disappeared.”

The other policeman she’d talked with hadn’t told her that. Theo was appalled that Denis might have been taken right beside where she lived. There were bushes to one side where a kidnapper might lurk. Chills trickled down her back.

The detective perused a list. “You are Mlle. Theodora Faraday, the American?”

Theo nodded. “Is it so apparent?”

“Your French is excellent,” he answered in careful English. Surprised, she smiled encouragement, but he returned to French. “I saw the drawing you gave the police. It was skillful.”

“But not much of a likeness—so small. His mother was the centerpiece.”

He nodded. “Still, it is good to have anything like that during an investigation.”

“He has been missing over a month.”

“I do not expect to find him alive,” the detective said bluntly.

Yves Fey has MFA in Creative Writing from the University of Oregon, and a BA in Pictorial Arts from UCLA. Yves began drawing as soon as she could hold a crayon and writing at twelve.

She’s been a tie dye artist, go-go dancer, creator of ceramic beasties, writing teacher, illustrator, and has won prizes for her chocolate desserts. Her current obsession is creating perfumes inspired by her Parisian characters.

Yves lives in Albany with her mystery writer husband and their cats, Charlotte and Emily, the Flying Bronte Sisters. 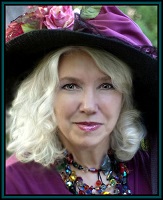