Shaun Halloran wouldn’t be in prison if glamorous Kat White hadn’t taken his gun. Pictures of the stunning blonde are plastered all over his cell. As soon as he can escape, she’s dead. But with his criminal empire crumbling, he can’t trust anyone.

Kat, panicked by poison pen letters, has nowhere to turn. Her parents are dead and her brother’s ill. Even her sexy new business partner may not be what he seems. When she receives life-changing news, vodka is the only answer… 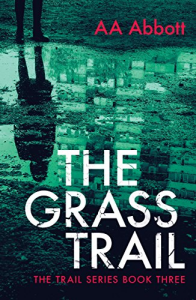 Today I am allowed to share an extract with you. Enjoy!

The buzzer sounded, jolting Kat out of a deep sleep. It felt stupidly early, although she’d returned home straight after her shift yesterday. Tim was in London, visiting Mayfair clubs and five star hotels. Ruefully, he’d told her that he’d be staying in a Travelodge on the North Circular for a week.

Daylight was creeping around the curtains and her phone revealed it was after nine. Pressing the button to speak, she asked who it was.

Kat dragged a filmy negligée of the palest green around her shoulders, tying it hastily as she dashed barefoot down two flights of stairs to the ground floor.

The young postman persuaded her to sign anyway. Most of the items were for Erik and the freelance workers who rented desks on the ground floor.

There was just one letter for her, with a London postmark, the address written in a semi-legible scrawl and using the minimum words necessary to have it delivered: Kat, 3 Leopold Passage, Birmingham.

Back in the flat, she opened it. The contents sent a chill down her spine.

Who could have sent such a letter? Only Erik, Amy and Tim knew where she lived. Marty might suspect, of course, but he didn’t know for sure. Erik had owned up to the distilling equipment, but not to giving his sister lodgings. Anyway, why would Marty call her a slut and threaten to kill her? If he really hated her so much, he’d had plenty of opportunity to do something about it in the past. Whatever their differences, he’d never been anything other than courteous towards her.

Erik, ten years older, had been a rock to her all her life, his support constant and unfailing. His head injury hadn’t changed his kindness and devotion to her; he was still risking Marty’s wrath by offering her a home. He couldn’t have been anywhere near London to post a letter, either. Despite Amy’s recent frostiness, she, too, had been a loyal friend for years and was beyond suspicion.

That left Tim, Kat’s perfect lover. The notion seemed fantastical. Nervously, Kat chewed her lip until she tasted the sharp tang of blood.

Who doesn’t love a cracking crime story, full of twists? I’m British crime thriller writer A.A. Abbott – known to friends as Helen – and I believe a good read is one of life’s greatest pleasures. I write fast-paced suspense thrillers set in the British cities of London and Birmingham. My latest books, the Trail series, follow the fortunes of two families running a vodka business – and what happens when they fall out with a London gangster. The Bride’s Trail leads from London to the secret tunnels below Birmingham’s historic Jewellery Quarter. The trail continues with a kidnap in the former Soviet Union in The Vodka Trail, an ill-starred venture with a marijuana farmer in The Grass Trail and a killer on the loose in The Revenge Trail. Like 10% of us, many of my family are dyslexic. While I’m not, I want my books to be enjoyed by readers with dyslexia and visual impairment too. That’s why I publish my thrillers in a LARGE PRINT dyslexia-friendly edition as well as the standard paperback and Kindle versions. Don’t forget, you can also adjust the font on your Kindle to suit your needs. I like speaking to book groups, business networks and social circles, and reading my thrillers and short stories at live fiction events. If you’re a book blogger, litfest organiser, reviewer or simply adore books, I’d love to hear from you. I’m a member of the Alliance of Independent Authors, Bristol Fiction Writers’ Group, and Birmingham’s New Street Authors. Find out more about the books I love to read and write, and get a free e-book, at https: //aaabbott.co.uk