Belfast 1993: A nocturnal ambulance service at the Belfast Central Station almost turns deadly for the young paramedic Ryan. In the crosshairs of the IRA, he is badly wounded and wakes up in the hospital with muddled memories. The police close the case fast, leaving too many burning questions unanswered. Most importantly, who was that old man who appeared at the scene out of nowhere and saved Ryan’s life? Not fully recovered yet, Ryan begins searching for the mysterious man, only to get dragged into a feud between opposing paramilitaries – with fatal consequences… 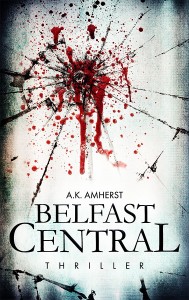 Today I will let the author do the talking with an exclusive guest post on location. Enjoy!

My debut novel „Belfast Central“ focuses a lot on contraries and contrasts. This also becomes evident in the chosen locations. My two main characters live in Belfast but at different times: Adam in the 1930s and Ryan in the 1990s. Although they call the same city home, it is not the same city at all. Adam finds himself in an economically struggling city in a time between two world wars. Still, the hostility between Protestants and Catholics is noticeable. Ryan, on the other hand, lives in the times of the Troubles when the hatred and violence between those two groups is omnipresent.

With Ryan being a Protestant growing up during the times of the Troubles in Belfast, I needed a different setting for Adam’s childhood. I choose Down Patrick as his hometown because of its historical relevance. After all, Saint Patrick – the patron saint of Ireland – is buried there. To emphasise the Catholic environment that Adam grew up in, I picked a town that is somehow a symbol for Catholicism and the Irish.

By choosing settings in Northern Ireland and being an Austrian writer myself, I broke one huge writer’s rule: Write about things you know. – Don’t get wrong. I did research. A lot. It took me 12 years to write this book and getting the facts straight was the number one priority for me. But still, I am not a local and never will be. I am also not claiming to know everything (who ever does?) but I gave my best to make this fiction story as authentic as possible.

Setting a crime story in my home town and involve some historical events from here would have been a much easier and safer path – especially for a debut novel. No language barrier, easier access to research material and so on. Still I choose a topic and a location I was not familiar with at the start. A lot of people ask me why. The simple answer is: Because I had a story to tell there.

The story of Adam and Ryan is very powerful one and part of its power comes from the place it is set in. The location of my book is not determined by the origin of the author but by the setting that is needed for the story to get to its full potential. A story that according to book blogger Tracy Terry raises the question: „What happens when two lives (and in many ways, two worlds) collide one fateful night?“

„Belfast Central“ tries to answer that question and follows the idea of Carl Gustav Jung, a Swiss psychiatrist and psychoanalyst: „The meeting of two personalities is like the contact of two chemical substances: if there is any reaction, both are transformed.“

Thank you, A.K. Amherst and LoveBooksGroup.

Born and raised in Austria, A.K. Amherst travelled the world from a young age. This influenced her writing, which relates to history and cultures of foreign countries. Intensive research is part of her job, and she really loves her job. You want to be taken into another setting and experience life from a different angle? Then Amherst is the writer for you. 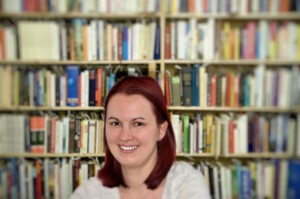