…Then he realised it was true.

Overstrike spans 4 generations of a family haunted by the prospect of an approaching alternate reality where their child has been erased from history.
Touching on themes of retro-causality, ethics and free will, and exploring ideas of cause, effect and retribution, it follows the path of Matt Howard, whose child, Ethan, is at risk, as he, his father and grandfather attempt to use their own abilities to manipulate reality in order to discover and prevent whoever is threatening Ethan.

Overstrike is volume I of Fixpoint, a trilogy about a family who discover their inherited ability to manipulate reality. It enables them to effect changes in order to safeguard themselves and all that they hold dear. But even seemingly small changes in a timeline can have unforeseen and far-reaching consequences. Follow the stories of the Howards, on a journey exploring reality, time and our own sense of self.

I’d have to say whenever the muse takes me. But it’s more about finding the headspace than than a particular location or time. If things are too noisy I’ve got no chance. If things are too quiet – again… that’s an issue. So it feels like I’m forever in search of my own Goldilocks zone *laughs*. Sometimes I find it in my local park with a laptop, sometimes it’s in a bustling coffee shop – I seem to change like the wind. Invariably it ends up being stolen moments interspaced between other activities – I try to use technology so that I can switch between desktop, laptop, tablet and phone and keep going in between being Dad’s taxi!

Kind of, I tend to think a lot about what I want to write before writing it. And quite often this is at a subconscious level – either in the bath or whilst driving. Then it’s a case of making a few notes at the earliest opportunity that I’ll pull into writing when I get a chance to have an hour or two. This means I have a growing colony of notepads that every so often I try to make sense of. Then there’s the background to what I write about. In a lot of cases this is reasonably complex and needs working-out to be consistent – I probably spend 60% of time in research, 10% in writing and 30% in editing.

It’s got to be coffee. Recently I just treated myself to a Nespresso machine, and it blew me away – I recommended these 100% – I did have concerns about the ability to recycle the capsules that it takes, until I found that Starbucks have a programme that take all capsules – Big respect! Bizarrely, the phase ‘keep me company’ is especially apt. I seem to get engrossed in what I’m doing while the coffee sits there going cold. Then I pop it in the microwave, take a sip and typically let it go cold again. But weirdly if I were without it, it would be like losing a limb.

Man, talk about an impossible question… I could never give you just one – 5 from my top 100 would be:

Robert Pirsig – Zen and the art of Motorcycle maintenance

Each of these 5 books make me think in very different directions and often make me reflect on my own life in different ways – I like that a lot, and often think that much of what you get form a book is sometimes knowledge of ourselves – That’s as true for AA Milne as it is for Robert A. Heinlein or Philip K Dick.

Very possibly however It’d likely always be Speculative fiction in one way or another together with some form of exploration and stream of consciousness with some form of social commentary. Saying it like that – makes me think it’s pretty wide already *laughs*. The first short-story that I had published was actually horror and I’m currently toying with the idea of an alternate reality fantasy but for the minute the Fixpoint trilogy will be head of the list. I’d say at the end of the day I’m a big fan of things like, The Twilight Zone, Tales of the unexpected, or more recently Netflix’s Black Mirror so while things might change in the future, I’d say they’re likely to be firmly one of the many sub-genres of Speculative fiction.

Typcially not, there may be aspects of a character that draws on may people but before long, characters have a life of their own. There is however one exception – Early on, when I was planning Overstrike, a friend asked that he be in it. As there was a character who fit the bill I was happy to base that one on him and make the character’s name a mangling of his – apart form that exception, I’d say not.

I try to, but invariably these days I take notes on my phone, tablet or laptop – Apple Fanboy through and through. Excellent  product’s and one’s I’d be happy to be sponsored by… *laughs* you don’t need to put that in…

I can’t say there is one. There’s plenty of books that I drop almost immediately, but that’s typically due to the author rather than the genre. If I had to pick one, I’d have say the genre of (say) amateur fan-fiction where established characters are made to dance in overly-clumsy, cartoonish ways, often with random sexual advances thrown in to seemingly  explore the author’s fantasies without actually making much sense. While I don’t object to it, it very-much leaves me cold.

Beyond the halo effect of someone like JK Rowling, I’d have to say someone like Stephen Fry although I’d fear his intellect would leave me for dead – definitely a polymath.

As writing is pretty tough, co-writing a book with an alternate-reality version of me (where other-me does all the leg-work) would be really compelling.

And if all of time and space were possible, I’m sure Leonardo would have something interesting to offer.

At the minute I’d have to say Japan – for two reasons.

First, I have always found Japan fascinating and having studied Jitsu, Aikido, Karate & Reiki and would find the culture very interesting

Second, relates to future plans for an alternate reality fantasy saga – but that would be telling.

CM Angus author and writer of Speculative fiction, Sci-fi and Horror grew up in the North East of England and now lives in Yorkshire with his wife and children. He is interested in all things creative & technological.

Currently working on Fixpoint, a series of books with each piece tackling different aspects of discontinuities in time and is a Speculative Fiction spanning 4 generations of a family haunted by the prospect of an approaching alternate reality where their child has been erased from history.

Overstrike, Volume 1 of Fixpoint, will be published by Elsewhen Press in early 2020. 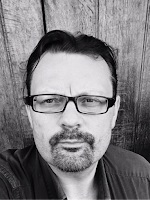