When someone mentions the City of Cambridge you probably think of an iconic building, its four corners stretching out of the once medieval mud and into the arms of everlasting heaven, its white limestone yearning into eternity… and without even knowing exactly what ephemeral joys or permanent wonders the vision brings to mind, it’s a safe bet that the one thought which does not occur to you is that the Chapel might not be there by Christmas.

Theo (Theophilus Ambrose Fitzwilliam Wedderburn to his friends) is a Junior Research Fellow in Number Theory. Prompted by a supervisee to demonstrate how to trace the provenance of bitcoins, Theo happens across a shocking revelation, with embarrassing ramifications for the whole University. Meanwhile he is being stalked unseen by someone from his childhood. To his annoyance, Theo falls for a cheap con… and discovers a horror set not only to rock the very seat of power itself but to change the face of Cambridge and its beautifully iconic image for ever. 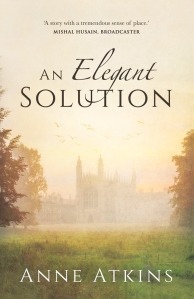 “A book with a tremendous sense of place,” broadcaster Mishal Hussein kindly wrote of my book An Elegant Solution. Leigh Chambers of 105 Radio’s Bookmark programme described Cambridge as “almost one of the characters”.

Place is reputedly far more important to some authors – Hardy; du Maurier – than others. The events in Jane Austen’s Highbury could take place almost anywhere in England: by contrast when I was recently shown the site of Manderley, I almost felt I’d met the de Winters.

I am one of those writers, presumably because so rooted in place myself. As a child I would become homesick even during the summer holidays, when my teacher-parents took us from Cambridge for a few weeks. When my husband Shaun was studying for ordination he was given a month’s placement in Yorkshire: I was so wretched after half a week I had to return to Cambridge alone.

My first novel, The Lost Child, though set in Parson’s Green where we were living at the time and which I also love, nonetheless had some Cambridge scenes; all my novels since have been set in or near the city.

In An Elegant Solution I wanted to write something which couldn’t happen anywhere else in the world. Just as PG Wodehouse created scenes and characters, houses and plots specific to a certain class and time, so I imagined conversations and relationships, people and events so specific to Cambridge they could barely even be found in Oxford.

My hero, Theo, is an Aspergic Cambridge mathematician. I have met many such… but never anywhere else. My villain targets a landmark recognised as the icon for Cambridge all over the globe.

And of course the Cam herself winds through the narrative, from her midsummer green loveliness to frozen Christmas harshness, carrying the plot along with her.

So yes, Cambridge is a character in my book.

Anne Atkins is a well-known English broadcaster and journalist, and regular contributor to BBC Radio 4’s Thought for the Day. She took an involuntary, and long, break from writing fiction when her son was diagnosed with Asperger Syndrome, their daughter repeatedly hospitalized with a severe illness, and finally the family was made homeless.. Thankfully those dark days are now behind her and she and her husband Shaun along with some of her children now live happily in Bedford, England.