He sees his wife’s eyes watching him in the rear-view mirror, the kids up on their knees to get a better look. That’s when he hears the scream…

You’re driving home from a family outing one afternoon, when a speeding car cuts you up, nearly causing you to crash. Like anyone would, you pull over to confront the driver.

But a glance into the backseat of the speeding car reveals a woman fighting to escape. She is terrified and she’s screaming for your help: these men have murdered her husband…

What would you do? 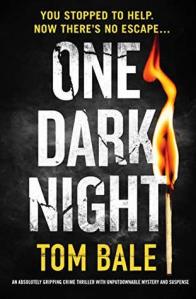 My first book by this author and I have to say it was an interesting read.

I was immediately sucked into the story and when you thought what you were to expect, you were taking in a completely different direction. Once you caught up with that, the author forced your brain to adept once again.

The author takes you on a journey where he makes you realize what your actions can lead you and your family into. A clear case of action – reaction but in a very bad way and better think before you act.

This book is a clear example of expection the unexpected and for the fans of stories that are (a bit) over the top.

It’s certainly my cup of tea, so I had a good time reading it. 4 stars.

Tom Bale decided that he wanted to be an author from the age of seven but, after another career got in the way, it wasn’t until much later that his dream was fulfilled.  After several books with Random House, Bookouture published two stunning ‘everyman’ thrillers by Tom See How They Run and All Fall Down.