When troubled army veteran and musician Josh Robertson returns home to Nashville to be the best man at his younger brother Chad’s wedding he’s just sure that he’s going to mess it all up somehow.

But when it becomes clear that the wedding might not be going to plan, it’s up to Josh and fellow guest Louise Giles to make sure that Chad and his wife-to-be Maggie get their perfect day.

Can Josh be the best man his brother needs? And is there somebody else who is beginning to realise that Josh could be her ‘best man’ too?

This is the second book I read from this author, but it’s the first one of the Nashville Connections series. Maybe you think I am mad for not starting with the beginning but I can assure you this one can be easily read as a stand alone. You get the right amount of hints that make you able to follow and to make you curious enough to add the rest to your wish list.
Normally I don’t like books featuring the Southern Belles (or beaus in this case). To me it’s always a bit over the top, but here there was only a touch of it and that resulted in a match made in heaven.
It’s a typical story where you already knows how it will end, but there was more to it than just the love story. Love of friends and family (which is often synonym to interfering but in a kind way) play a big part as well and then there is Josh …
A fluently written story. Perfect for reading during the summer or during the winter or in brief, whenever you want to lose yourself in a book. 4 stars.
Thank you, Angela Britnell and Choc Lit.
About the author

Angela was born in St. Stephen, Cornwall, England. After completing her A-Levels she worked as a Naval Secretary. She met her husband, a US Naval Flight Officer while being based at a small NATO Headquarters on the Jutland Peninsula in Denmark. They lived together in Denmark, Sicily, California, southern Maryland and London before settling in Franklin, Tennessee.

Angela took a creative writing course in 2000 and loved it so much that she has barely put her pen down since. She has had short stories and novels published in the US. Her novel Sugar & Spice, won Choc Lit’s Search for an American Star competition and is her UK debut. 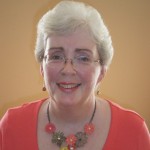