It would degrade me to marry Heathcliff now…”

Cathy’s immortal words from Wuthering Heights change Heathcliff’s life.  At just seventeen years of age, heartbroken and penniless, he runs away to face an unknown future.

Three years later, he returns – much improved in manners, appearance and prosperity.

But what happened during those years? How could he have made his fortune, from nothing? Who might his parents have been? And what fate turned him into literature’s most famous anti-hero?

For almost two centuries, these questions have remained unanswered. 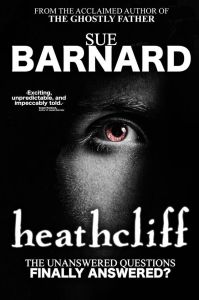 I write during the day, interspersed with other tasks.  My desk has a lovely view of the garden, which can be both relaxing and distracting – the latter especially when the birds come to the feeders.  But I wouldn’t have it any other way.

I wish I had.  As it is, my writing process is very haphazard, and I’m a terrible procrastinator.

Coffee in the mornings, tea in the afternoons, water at any time of day.  I never eat at my desk.

Oh, that’s far too difficult – I can’t possibly narrow it down to just one.  Having said that, I would like to give a special mention to two.

The first is That Devil Called Love by Lynda Chater.  It’s a modern reworking of the Faust legend, told with great perception and humour, in which the heroine finds out the hard way that youth, beauty, wealth and fame don’t necessarily hold the key to lasting happiness.  I first read it when I was in my forties and was starting to feel depressed about growing old, and I can honestly say it changed my whole outlook on life.  It’s such an ingenious concept that I’ve often wished I’d thought of the idea myself.

The second one, although it’s a play rather than a book, is Our Town by Thornton Wilder.  This contains one of the most powerful messages in any work of literature: Life is precious, and every moment should be treasured.

I’d quite like to have a try at writing fantasy or speculative fiction.  But that’s totally different from anything I’ve tackled before, so it would be a huge learning curve.

I wouldn’t dare – I’d have no friends left!

No, because I rarely carry a bag.  But I always have my smartphone with me, so I make notes on that, then email them to myself later and hope they still make some kind of sense.  I have some lovely notebooks which I’ve received as gifts, but it seems a shame to spoil them by writing in them.

Highbrow, introspective, depressing literary fiction.  I had more than enough of that when I was doing A-Level English.  Reading should be a pleasure, not a pain.

– If you had the chance to co-write a book, whom would it be with?

I’d have loved to co-write a book with the wonderful Terry Pratchett or Sue Townsend.  Sadly, I won’t have the opportunity for either of those now.

It would depend if it was relevant to what I’m writing at the time.  One of my books is set in Italy and another is set partly in France, and in both cases I’ve visited the locations during the course of writing them.

Of course, I’d love to “research” a book set on a sunny tropical island…

Sue Barnard is a British novelist, editor and award-winning poet whose family background is far stranger than any work of fiction. She would write a book about it if she thought anybody would believe her.

Sue was born in North Wales but has spent most of her life in and around Manchester. She speaks French like a Belgian, German like a schoolgirl, and Italian and Portuguese like an Englishwoman abroad.

Her mind is so warped that she has appeared on BBC TV’s Only Connect quiz show, and she has also compiled questions for BBC Radio 4’s fiendishly difficult Round Britain Quiz. This once caused one of her sons to describe her as “professionally weird.” The label has stuck.

Sue now lives in Cheshire, UK, with her extremely patient husband and a large collection of unfinished scribblings.