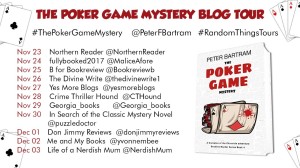 Poker is a game for the dead lucky…
Crime reporter Colin Crampton discovers nightclub bouncer Steve Telford murdered. Colin can’t understand why five cards of a poker hand are laid out next to the body.

As Colin investigates, he becomes entangled with three former special forces soldiers from the Second World War. All have motives to kill Telford. But Colin’s probe is derailed when a shock change at the Evening Chronicle puts the paper’s – and Colin’s – future in peril.

The tension ratchets higher when the life of a young girl is on the line. Colin is forced to go head-to-head in a poker game with sinister newspaper owner Quentin Pell to save her.

There are laughs alongside the action as Colin and his feisty girlfriend Shirley shuffle the cards and play the most dangerous game of all – with their own lives at stake. 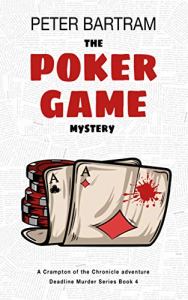 Crime reporter Colin Crampton needs a bag of gold sovereigns in order to trap a villain. With help from his feisty Australian girlfriend Shirley Goldsmith, he hopes to borrow them from Brighton coin dealer Gerald Kummer. Kummer is reluctant until Shirley swings into action. Now read on…

Shirley moved towards Kummer and flashed her brightest smile.

“You look like the kind of man I like to do business with,” she said in a low husky voice.

Shirley said: “You see, it’s like this. I’m a model. A photographic model. And I appear in magazines. Now this photographer wants to hire me for a very special photoshoot. The theme is the Midas touch. You’ve heard of King Midas. He’s that Greek guy. Everything he touched turned to gold. Sounded great until he wanted to eat a sandwich.”

Kummer unbuttoned his top shirt button. Ran his finger nervously around the collar.

“Well, here’s the point. In this photo scene, I’m Midas’ concubine. And I’m dressed in a beautiful gown, just like those Greek concubines wore.”

“Yeah! I’d heard they looked good,” Kummer croaked. His throat was as dry as a bishop’s wit.

Shirley let Kummer catch a whiff of her perfume.

She said: “The thing is, this authentic Greek concubine’s gown comes over my left shoulder and is cut away to my waist. You know what that means, don’t you?”

“No,” Kummer said in a hoarse whisper.

“It means my right breast is exposed – which is fine for a Greek concubine, but not for a model from Adelaide. Wouldn’t you agree, Gerald?”

“So the photographer has suggested I should hold a bag of sovereigns over my right breast.”

“It’ll need to be a big bag,” Kummer spluttered.

“Well, yes, Gerald. You say the nicest things to a girl.”

Kummer’s mouth had dropped open. His tongue lolled out of one side.

He said: “What if I give you a bag with pennies inside? Nobody would know the difference.”

“I would know the difference, Gerald. How do you think I would feel knowing that I held a bag that told a lie? I wouldn’t be able to get into character. And that means the pictures

wouldn’t be any good. And I wouldn’t want to give you a signed picture that didn’t show me at my best.”

He said: “I don’t suppose I could have a picture without you holding the bag.”

Shirley winked at Kummer. “Oooh! If you’re suggesting what I think you are, you’re a very naughty man. I like naughty men – especially when they have bags of sovereigns.”

Kummer dragged his reptilian gaze away from Shirley and moved towards a large Chubb safe at the back of his office. He reached inside his trouser pocket and pulled out a large key on a piece of string. He opened the safe. Looked back at Shirley.

“If I lend you a bag with twenty sovereigns, I want them back in two days.”

He turned his back on us so we couldn’t see inside the safe. He fumbled about inside for a couple of minutes. He turned. He was holding a small red leather pouch, pulled tight at the top with a drawstring.

He came back towards Shirley and handed her the pouch.

“Will this be big enough to cover your, er… embarrassment?”

“It will manage perfectly, you sweet little man,” Shirley said.

She leant forward and gave Kummer the lightest of pecks on the cheek.

He beamed like he’d just received a proposal of marriage from Raquel Welch.

Peter Bartram brings years of experience as a journalist to his Crampton of the Chronicle crime mystery series. His novels are fast-paced and humorous – the action is matched by the laughs. The books feature a host of colourful characters as befits stories set in Brighton, one of Britain’s most trend-setting towns. You can download Murder in Capital Letters, a free book in the series, for your Kindle from http://www.colincrampton.com. Peter began his career as a reporter on a local weekly newspaper before editing newspapers and magazines in London, England and, finally, becoming freelance. He has done most things in journalism from door-stepping for quotes to writing serious editorials. He’s pursued stories in locations as diverse as 700-feet down a coal mine and a courtier’s chambers at Buckingham Palace. Peter is a member of the Society of Authors and the Crime Writers’ Association 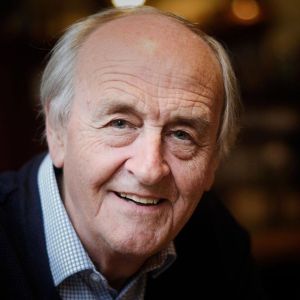