The last interstellar colony ship is down to its final batch of humans after the robots in charge unhelpfully deleted the rest. But rebooting a species and training them for the arduous task of colonisation isn’t easy – especially when the planet below is filled with monsters, the humans are more interested in asking questions than learning, and the robots are all programmed to kill each other.

But the fate of humanity rests on creating a new civilization on the planet below, and there are twelve seats on the lander. Will manipulation or loyalty save the day? 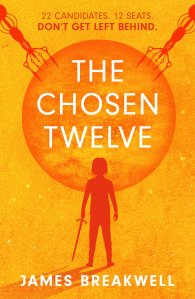 SIGMA SHOOK OUT her arms and legs at the starting line. This was going to be her year. Not that she had any idea what year it was or when that year might have started.
The annual Not the Death Race wasn’t so much “annual” as semi-random. Sigma hosted it whenever she felt like it had been long enough since the last one. This time, it felt like it had been several lifetimes. In a way, it had. She spent her days living and dying in a virtual world dominated by homicidal kangaroos. The race would be a nice change of pace. It offered the mere possibility of death as opposed to the absolute certainty of it in the simulations. Even real death beat another day at the Table.
“On your mark!” Kappa said.
Sigma crouched in the starting position. She had to be fast off the line. If she wasn’t, Iota might catch her and lock her in a utility closet—again. The first rule of the Not the Death Race was: anything not expressly
forbidden was implicitly allowed. The second rule was: know how to break out of a utility closet.
Kappa raised his arm. “Get set!”
Beta put his toe on the starting line. Iota leaned forward.
“What do you think you’re doing?” Epsilon asked.
Sigma sighed. She had picked this start time specifically because Epsilon was supposed to be busy at the Table.
She must have gotten her civilization wiped out faster than usual.
“It’s not what it looks like,” Sigma said.
“Super,” Epsilon said, “because it looks like the Not the Death Race.”
Despite making the organics face their simulated mortality at the Table on a daily basis, SCASL had forbidden them from engaging in real-life risk-taking behavior, which included roaming the outer halls, whistling while chewing, death races, and—after reviewing Edubot’s files—Not the Death Races. That made Sigma want to have one all the more.
Epsilon looked at the three runners, who were clearly ready to start a race, and Kappa, who was about to send them off.
“What would you call this?” Epsilon asked.
“The Not the Not the Death Race,” Sigma said.

James Breakwell is a professional comedy writer and amateur father of four girls, ages ten and under. He is best known for his family humor Twitter account @XplodingUnicorn, which has more than a million followers. He has published three comedy parenting books that explore hot button issues like the benefits of doing as little as possible and the best ways to protect your child from zombie attacks. His fourth book, Prance Like No One’s Watching: A Guided Journal for Exploding Unicorns, teaches kids to find humor in the world around them while also avoiding the undead. The Chosen Twelve will be James’ science fiction debut. He lives in Indiana, US.

– 3 paperback copies of The Chosen Twelve

– 3 ecopies of The Chosen Twelve