A Little Hotel in Cornwall Book 3

Christmas is coming to Port Hewer and the hotel Penmarrow, where Maisie is suffering a case of the holiday blues far from home this year — until Gavin, a young American businessman staying at the hotel through Christmas, talks her into joining him as his partner in the hotel’s ice sculpting competition in a mutual pact to enjoy the holidays to the fullest.

Meanwhile, Maisie experiences the village Christmas season vicariously through Sidney, and continues writing her Poe-inspired story with only Sidney aware of her secret novel. She soon learns, however, that criticism and praise go hand in hand when he takes issue with her latest chapters, which puts pressure on their friendship, too.

But is that what’s really the issue between them? Because handsome Gavin has more than ice sculpting in mind when it comes to Maisie’s time, which comes as a surprise to no one who’s seen them together. As Maisie faces this sudden romantic dilemma, she realizes what she wants most in her life … and faces a question of what her heart wants most, too. 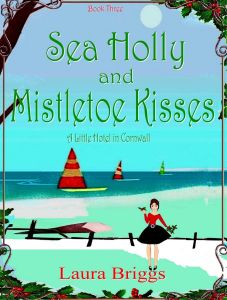 Thank you to Els for letting me share some fun facts about my latest romance read with her audience! Titled Sea Holly and Mistletoe Kisses, it is the third installment in my series about aspiring author Maisie Clark, who finds herself working at an elegant seaside Cornish hotel. Dive into the trivia below for a taste of the inspiration and hidden facts behind Maisie’s latest adventure in this brand new cosy Christmas read!

1) The Sea Holly referenced in the book’s title refers to a plant found growing on Cornish shores and dunes. With waxy leaves, roots similar to those of a carrot, and attractive blue-purple blossoms in summertime, it seems quite different from the more traditional Christmas holly with red berries.

2) Inspiration for the holiday ice sculpting competition that Maisie and Gavin enter at the historic hotel where she works actually came from watching the Hallmark Channel Movie Ice Sculpture Christmas. Ideas for the actual ice sculptures described in the story came from anywhere and everywhere, including a classic Dick and Jane story!

3) The Christmas masquerade party Maisie attends was inspired by an incredibly lavish Twelfth Night party featured in an episode of the 2013 Russian Sherlock Holmes television show. And even though the setting, time, and other details are obviously rather different, it manages to retain the spirit of that colorful event (but, of course, no crime takes place at the party Maisie attends, unlike the one on the TV episode!!).

4) Cornish storm watching is a real-life winter past time in Cornwall that sounds thrilling, adventurous, and a tiny bit dangerous. In Maisie’s case, it’s also quite romantic, with the emotions inside her just as storm-tossed as the waves on the beach below.

5) Fans who paid close attention to details in Book Two of the series, A Spirited Girl on Cornish Shores, will no doubt spot another reference to the psychic’s cryptic prediction about Cardiff in this book—it pops up in Sea Holly and Mistletoe Kisses in the scene where Molly the chambermaid is stargazing with a handsome and semi-mysterious guest at the hotel.

Perhaps these fun facts will make you curious enough to check out Maisie’s adventures in Cornwall. You can find books 1-3 in the fun, feel-good series at your favorite eBook retailer, with Book 4, The Cornish Secret of Summer’s Promise, now available for pre-order on Amazon!

Laura Briggs is the author of several feel-good romance reads, including the Top 100 Amazon UK seller ‘A Wedding in Cornwall’. She has a fondness for vintage style dresses (especially ones with polka dots), and reads everything from Jane Austen to modern day mysteries. When she’s not writing, she enjoys spending time with family and friends, caring for her pets, gardening, and seeing the occasional movie or play.