Jillian Bright has lived and loved the world over, wild and free, her soul awakened and destroyed, mended and strengthened. From empowering women through custom-made bikinis in Costa Rica to listening to a Bulgarian astrologer predict her son’s unplanned birth, her journey took her from country-to-country, unveiling passion and purpose. But it was the various crossroads along the way that taught her the most meaningful lesson: It’s never the first step off the cliff that’s the most terrifying. It isn’t even the free fall that happens afterward. The scariest part is the crash landing when self-doubt makes you think that maybe you can’t actually fly. That’s when you begin to understand that you have to grow your own wings. That’s why when Jillian found herself in South America, robbed of everything that mattered most and facing the biggest crossroads of her life, she went all in—and dived off the cliff. The Trouble with Wings is a deeply honest and stirring memoir about living life from your heart and trusting yourself to say yes—even when it means you have to risk it all. Jillian Bright is an award-winning travel writer, author, copywriter, retreat leader, and mother whose mission is to empower womxn, especially other moms by telling stories, amplifying voices, and creating sacred space and community. She is originally from Northern California and now lives in the Italian countryside with her winemaker partner and their son. 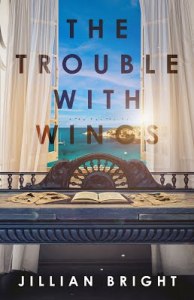 Part 1: Awakening
The giant blue morpho butterfly inhabits the jungles of Central and South America and is one of the largest, most beautiful butterflies on the planet with its blue iridescent wings and impressive eight-inch wingspan.
A morpho butterfly in flight is mesmerizing: slowly, audibly flapping its massive wings as it dances through the jungle canopy. Its cobalt wings shimmer against the sky when they open and seemingly disappear when they close, concealing itself in the brown color of its underwing.
You watch it float by as if you were in a trance, not saying a word, not even breathing. Every instinct you feel is to follow it. The slow hypnotic flapping of its wings, appearing and disappearing, gives you the sensation that you’re witnessing something entirely outside the human realm, a moment of flickering beauty and transitory magic.
Some legends say that if you see one, you’ll be granted a wish. Others warn that it’s a dangerous omen. If you fix your eyes on the dazzling flashes of blue and give chase, pushing past dense jungle foliage and vines not wanting to let the butterfly out of your sight, it would only take a few minutes to find yourself utterly lost. Getting caught too deep in the morpho’s spell and following it into the jungle has a price.
If you can’t let it go, you might never find your way back out …

Jillian Bright is an author, award-winning travel writer, ghostwriter, copywriter, retreat leader, and mama on a mission. She wants to empower womxn, especially other moms, by telling stories, amplifying voices, and creating sacred space, community, and a vision for a better future.

She believes that when we truly listen to each other, connect, collaborate, and organize, we WILL create a better world for our kids and our future generations.

Jillian has lived in California, Costa Rica, Argentina, and Italy and traveled throughout the world. She was the founder of a custom swimwear company that existed to empower women to embrace who they are rather than who they’re told they should be and organized several fundraising efforts to fight destructive, irresponsible farming practices in one of the Northern California cannabis communities.

She’s currently working on a historical fantasy trilogy series set in the ancient Mediterranean and organizing retreats and travel adventures for womxn in Italy, Argentina, and Costa Rica. She hopes her retreats will inspire womxn to come together, claim their passion for life, and collaborate with each for lasting change.

Rising Sisterhood is her second book as a contributing author and her memoir, The Trouble with Wings releases June 15, 2021 from Burning Soul Press.

Jillian donates a portion of her book and copywriting revenue to women and women-led organizations creating change for women, girls, and mothers across the globe.

Jillian is originally from Northern California and now lives in the Italian countryside with her winemaker partner and their son where she eats as much gelato as humanly possible and is determined to learn to sail.