Frost sparkles on the bare winter branches, as night falls over the quiet country lanes bordering the fens. But nestled beneath an ivy-covered bough, a body lies pale in the bright moonlight…

When a promising local artist disappears, the victim’s brother begs Detective Tara Thorpe to take the case. It seems there’s no evidence of foul play… he simply disappeared without a trace.

Tara agrees to do some digging… never mind that her unorthodox approach to policing has got a few of her colleagues’ backs up. Amongst them is her former supervisor Detective Patrick Wilkins… he’s had enough of Tara calling the shots and will do anything to knock her down. She must be careful.

At least she has an ally in their boss, Detective Garstin Blake. He’ll always back her hunches. If anything, they work together too well… at least, that’s the rumour around the station these days.

When a body of a young woman is found frozen near the fens, Tara’s evidence suddenly becomes key to solving a high-profile murder. Is their missing artist still a victim… or in fact a clever murderer with a deadly plan? 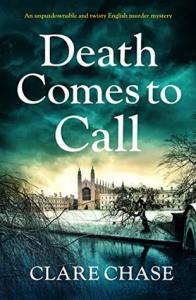 When you are reading a series you enjoy, it’s always counting down the days until you can finally get your hands on the next part. A pity sometimes that writing does not go as fast as reading LOL, but on the other hand it would be rather difficult keeping up with all the ones you want to devour.

So it was back to Tara who is being Tara, which is a good but quite dangerous from time to time not only for herself but for other people as well. I like the way she is so committed but she seems to forget that she is part of a team now.

In this book the author gives us the chance to follow the investigation as usual, but she adds a bit more focus on Tara’s and Blake’s lives. By doing this she opens a door or keeps the door open to a blast from the past and/or new dangers forcing them to watch their backs.

The author leaves us with a nice cliffhanger which made me already start crossing the dates on the calendar even though this one is not even published when I write this up.

The book kept me entertained with its unexpected outcome and Tara is of course, once again, the star of the show. 5 stars.

Clare Chase writes women sleuth mysteries and recently signed a three-book deal with Bookouture for a new crime series set in Cambridge. The opening book, Murder on the Marshes, is available for pre-order and will publish in July 2018. The mystery follows investigative journalist Tara Thorpe as she teams up with Detective Garstin Blake to solve the murder of a young female professor at Cambridge University. The case takes them through the dark underbelly of Cambridge and in to the murky fens that surround the centuries-old city. The second and third books in the series are scheduled for publication in late 2018/early 2019.

After graduating from London University with a degree in English Literature, Clare moved to Cambridge and has lived there ever since. She’s fascinated by the city’s contrasts and contradictions, which feed into her writing. She’s worked in diverse settings – from the 800-year-old University to one of the local prisons – and lived everywhere from the house of a Lord to a slug-infested flat. The terrace she now occupies, with her husband and teenage children, presents a good happy medium.

As well as writing, Clare loves family time, art and architecture, cooking, and of course, reading other people’s books.

Clare’s debut novel, You Think You Know Me, was shortlisted for the Novelicious Undiscovered Award 2012, and an EPIC award in 2015. It was also chosen as a debut of the month by Lovereading.

You can find Clare’s website and blog at www.clarechase.com