The DeWitt Agency assigned disgraced ex-cop Carson a simple job: carry two briefcases of cash to swap for two artworks stolen from a German museum. Except nothing’s simple in the Donbass, the breakaway Ukrainian region overrun by militias, warlords, and bandits.

After a brutal zrada – betrayal – Carson finds herself alone and hunted forty miles behind the front lines with half the money, one of the paintings, and a huge target hung on her back. The militia behind the exchange thinks she blew up their deal and wants the money and her hide. Her co-workers were in on the double-cross. And the Agency can’t send help into the hottest war in Europe.

Carson’s never been one to wait to be rescued. She hires Galina – a tough local with a harrowing past and a taste for revenge – to help her cut through every checkpoint, freelance army, crooked cop, and firefight between her and the West. But the road to safety is long and poorly paved. A vengeful militia commander, a Russian special-forces operator with an agenda, and her own ex-colleagues have Carson in their crosshairs.

Carson’s life is now worth less than a suitcase of money or paint on a plank…but if they want to take it from her, she’s going to make them pay.

Thank you, Lance Charnes  and Pump Up Your Book

Lance Charnes has been an Air Force intelligence officer, information technology manager, computer-game artist, set designer, and Jeopardy! contestant, and is now an emergency management specialist. He’s had training in architectural rendering, terrorist incident response, and maritime archaeology, though not all at the same time. His Facebook author page features spies, archaeology, and art crime.

Lance is the author of the DeWitt Agency Files series of international art-crime novels (The Collection, Stealing Ghosts, and Chasing Clay), the international thriller Doha 12, and the near-future thriller South. All are available in trade paperback and digital editions 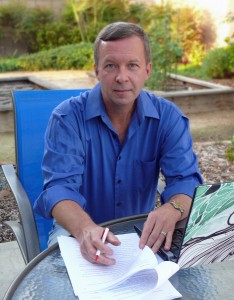