Meet Eve Mallow: an American far from home, a professional busybody… and an amateur detective?

Seasoned obituary writer Eve Mallow has a new assignment: to tell the life story of famed musician Bernard Fitzpatrick. A chance to spend a few days in the sweet little village of Saxford St Peter, walking the country lanes with her beloved dachshund Gus and meeting new people sounds like a dream. But it turns out that Bernard’s life was much less interesting than his death. On the day she arrives, news breaks that the charismatic cellist was the victim of a grisly murder. Could this quaint English village be hiding a dark secret?

As Eve starts to interview Bernard’s friends and colleagues, she finds that he’d ruffled a few feathers. In fact, from the keepers of the Cross Keys Inn to his own staff at High House, there’s barely a person in town who doesn’t have some reason to hate him… is one of the friendly villagers a cold-blooded killer?

Eve hoped Saxford St Peter would be the perfect escape from her busy city life. But there is darkness even in the most sunlit of settings. And when a second body is found, Eve becomes certain that one of the people she’s met must be the murderer. She has never done any detective work before… but is there something in her notes that can crack the case? 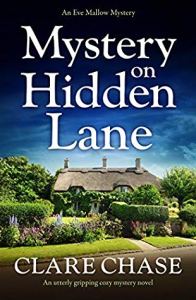 This is a new series in the category cozy mysteries. The ones I usually read have owners of B&B’s or shops or chefs in the main role, but kudos to the author for giving her amateur sleuth a rather unusual job. 🙂

When you read this kind of books, you often wonder why there are still police forces around because the amateur sleuth always beats them to it by far. But that’s just the nice characteristic of these stories.

Eve starts her job the way she always does, but then things change. She probably did not know she had it in her, but when the person she has to write about did not die they way her subjects normally do, she starts digging deeper and deeper. Maybe even too deep … She goes from writer to detective and that can turn against her.

Maybe a bit too many details about the surroundings in the beginning, but the pace picks up afterwards.

A nice start to a new series. Looking forward to more adventures. 4 stars.

Thank you, Clare Chase and Bookouture.

Clare Chase writes women sleuth mysteries. After graduating from London University with a degree in English Literature, Clare moved to Cambridge and has lived there ever since. She’s fascinated by the city’s contrasts and contradictions, which feed into her writing. She’s worked in diverse settings – from the 800-year-old University to one of the local prisons – and lived everywhere from the house of a Lord to a slug-infested flat. The terrace she now occupies, with her husband and teenage children, presents a good happy medium.

As well as writing, Clare loves family time, art and architecture, cooking, and of course, reading other people’s books.