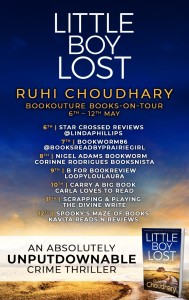 The clear sky burst into flames of peach and gold, illuminating the small body leaning against the rocks. He looked even smaller than he had in the photos, purple marks blemishing his neck. His eyes were open, staring ahead at the vastness of the still water.

When three nine-year-old boys go missing on a field trip to Lakemore’s annual spring festival, panic tears through the small town. Detective Mackenzie Price and her partner Nick Blackwood lead the search, but no trace of the boys is found—until one of them is found murdered, a note stuffed down his throat.

“Find Johnny’s killer, or they all die.”

Johnny was supposedly a victim of Jeremiah, a serial killer Nick helped put behind bars nearly a decade ago for the murder of ten young boys. But when Mack and Nick pay him a visit, he claims that he knows nothing—and that he remains innocent of Johnny’s murder.

Then a second boy is found, another clue left on his body, leaving just one left alive. Desperate to save the last boy’s life, Mackenzie and Nick comb over Jeremiah’s case, only to discover proof of a shocking cover-up—and a killer who will stop at nothing to right the wrongs of the past. 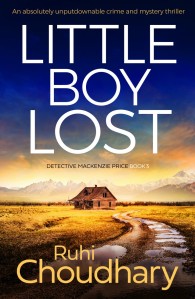 This was also one of those books I was looking forward to. The cases Detectives Nick Blackwood and Mackenzie Price had to deal with in the previous two books were very thrilling, but what captivated me maybe even more was Mackenzie’s back story. It was intriguing, fascinating and complicated and I loved it. Now it was time to sit down and find out what was going to be discovered next and of course with cases they were going to have to solve.

Lakemore is only a small village, but killers seem to like it there. You wonder why they just don’t give up? Are they really convinced they can outsmart our fantastic duo? They should better think again.

Some killers deny everything even though there are tons of evidence against them, but maybe they sometimes tell the truth when they say they had nothing to do with that specific one? What do you do when you are the arresting police officer? Do you believe them and dig deeper or do you let go and maybe leave a killer off the hook?

Time goes by and it seems like someone was very busy planning and preparing thoroughly, the annual spring festival appearing to be the prefect place to strike and set the wheels in motion.

OMG never a dull moment with this book, I can tell you that! I enjoyed every bit of it and I was very sad to say goodbye to Nick and Mack for now, but I do understand they more than deserve a bit of rest after what they went through. I am counting the days until I meet them again, refreshed and ready for action once again. 5 stars

Thank you, Ruhi Choudhary and Bookouture.

Ruhi Choudhary discovered her passion for writing when she was seven years old and wrote her first Star Trek episode. Being a fan of the dark and twisted, she found her calling in crime thriller.

She likes to write stories that make you a little uncomfortable and characters that you struggle to make up your mind about but stay with you.

She lives in Toronto and spends her days training to be a scientist and wishing it rained more often!