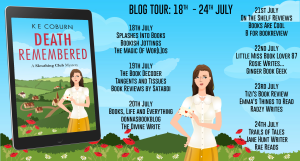 The sun is shining, the birds are singing, but Charity Nicholls is bored of her quiet life in a tiny English village where nothing ever happens. Other than her nagging, marriage-obsessed mother, all she has to fill the time are her dreams of becoming a writer, and the Sleuthing Club – the mystery-reading book club she attends every week.

But everything changes the day her father receives a poison pen letter.

With the help of the Sleuthing Club, particularly handsome Henry Taylor, Charity is determined to find the culprit. But when people start dying and the police arrive, led by the infuriating Inspector James Lawrence, her little village becomes a hotbed of crime.

Can Charity find the murderer before anyone else dies? 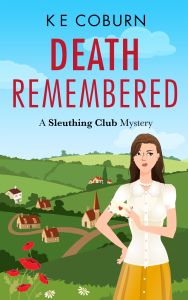 The Fun of Crossing Genres!

If you’re an aspiring author, lots of people will tell you that you shouldn’t cross genres, and whilst this can sometimes be true, I believe it’s all about timing. Writing in too many genres too early can be detrimental because you never get chance to really gain momentum in a genre, for example rom-coms or historical fiction, but once you’ve become a bit established, it can be fun to write something different, especially if you’re doing it under a pen name, as I am!

I started my full-time career writing romantic comedies under my real name of Katie Ginger but before that, when I was just starting out, I had some cozy mystery short stories published. I’ve always loved cozies and read as many of those as I do romance novels. I love anything from the greats of golden age crime such as Agatha Christie and Ngaio Marsh to modern writers like T E Kinsey and Helena Dixon. I’m so pleased to see the genre is still as popular as it was back in its heyday.

The thing is, writers write stories! We don’t necessarily think in terms of genres. If my mind has created a story it wants me to tell, I just write it! And whilst I’m not advocating ignoring professional publishing advice, I am saying you shouldn’t let it stifle your creativity. Write the book! Even if it sits there for a while.

A couple of years ago, I had this idea for the Sleuthing Club and got the first one in the series submission-ready. As my career took off though, I didn’t want to lose any momentum in women’s fiction, so I put the manuscript to one side. But it kept looking at me! It kept staring at me begging me to do something with it and the characters just wouldn’t leave me alone! I started getting the feeling that if someone else were to publish a story with the same idea, I’d be absolutely gutted they got theirs out there first.

Eventually, lockdown was the push I needed to get this story out there. I didn’t want to waste it because it was something I really believed in. But I decided I didn’t want another set of deadlines on top of the ones I already for my romance novels and made the decision to Indie publish. I found an editor (who had worked with M C Beaton ­ the greatest modern cozy mystery writer ever!) and sent it out.

I’ve absolutely loved working on Death Remembered and the second book in the series is beginning to take shape. They take a lot of work with layering in the golden age crime element, the historical period, the character arcs and the mystery itself, but it’s time well spent. The characters are so real to me that even when I don’t want them to, they start talking to me! I think that’s the sign of a good story, don’t you? I just hope I’ve done them all justice!

I really hope you find their world as interesting to read as I have writing it. And I’d love to know if you guess who the culprit is!

K E Coburn lives by the seaside in Kent, England, and spends her time plotting murders and mayhem for her imaginary friends in the Sleuthing Club!

As well as having a master’s degree in history, she’s a huge fan of everything vintage, especially the 1950s, and loves researching this interesting period. Nothing makes her happier than looking at old photographs, drinking old-fashioned cocktails, and doing as little work as possible.

Her debut novel Death Remembered: A Sleuthing Club Mystery (Book 1) will be published in July 2020.