“A high-flying adventure of a novel, filled with ambitious ideas and a breathtaking conclusion.” — The Leighgendarium

In the SciFi/Fantasy spirit of Firefly, Buck Rogers, Flash Gordon, Stargate, and Escape from New York…

Hotdog pilot Marcus Powell has been selected to test Taurus Enterprises’ Crossline prototype craft and its newly developed warp thrusters, which, if successful, will revolutionize space travel as we know it.

But during his jaunt across the stars, Powell is forced into a parallel universe — including a parallel Earth — where he finds himself at the center of an epic battle he may have been destined for all along.

Meanwhile, back home, reclusive oil tycoon and Taurus CEO Buddy Rheams Jr. — who sent Powell on that very mission — has a mysterious past and a secret agenda, one that could prevent Powell from ever making it back to his wife and little girl.

From author Russ Colchamiro, Crossline is a psychedelic, action-packed romp across time, space, and dimension that asks the question: once you cross the line, can you ever really go back?

The warp engines were ready for the first of six return blasts it would take to get him back to Earth, when a blip came across the screen. Powell shifted toward the incoming message, but his short-range sensor interrupted him. Something in the Saturn rings. Video amplification revealed that among a cluster of particles was an odd-shaped fragment, with sharper, more reflective edges than he would expect. But he supposed that after debris crashed around over millions if not billions of years, who knew what was really out there? He looked again. Probably nothing of consequence. Just some lagging hallucination from the multiple warps.

Powell focused his monitor on the third ring layer. Studying it more carefully, his sensors revealed that the particle cluster wasn’t in the Saturn ring, but among it. The fragment wasn’t ran- dom, a collection of dust, or some anomalous asteroid fragment.

It was another ship. Looking just like Crossline. And headed his way.

Russ Colchamiro is the author of the rollicking space adventure, Crossline, the zany SF/F backpacking comedy series Finders Keepers: The Definitive Edition, Genius de Milo, and Astropalooza, and is editor of the SF anthology Love, Murder & Mayhem, all with Crazy 8 Press.

Russ lives in New Jersey with his wife, two ninjas, and crazy dog Simon, who may in fact be an alien himself. Russ has also contributed to several other anthologies, including Tales of the Crimson Keep, Pangaea, Altered States of the Union, Camelot 13, TV Gods 2, They Keep Killing Glenn, Thrilling Adventure Yarns, Camelot 13, and Brave New Girls.

He is now working on the first novel in a new series featuring his hardboiled private eye Angela Hardwicke, and the first of three collaborative novella projects. 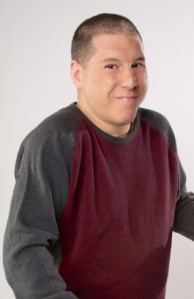