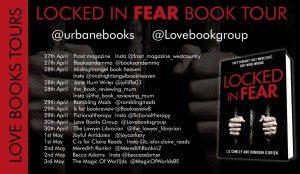 In a sleepy country village, Detective Inspector Robin Marshal – now in retirement – is nearly killed by a stranger. His friend Alice, a police psychiatrist, discovers that the murder attempt was almost certainly ordered by a terrifying criminal, ‘Big Mack’, currently incarcerated in a notoriously violent prison. There his criminal kingdom controls not only the inmates, but many of the guards, through the power of money and the threat of extreme violence.

When Alice goes to work in the prison to find out more, she too, becomes a target, her car machine-gunned on a country road, and Robin is attacked again while recovering in Spain.

Under pressure from an outraged public and with political concern rising, the authorities try to put a stop to Big Mack’s activities. But everyone is under threat when he is suddenly at large following a murderous escape. How can this evil kingpin be stopped?

Everything had been going so well, until the dog limped into the house whimpering and covered in blood.

Up to that moment Pam Marshal had felt surprisingly upbeat – despite the fact that she was becoming immobilised by Parkinson’s Disease and these days was mostly confined to a wheelchair. She had reflected how lucky she was to have a husband like Robin who had retired early from the police force to look after her and suggested moving to the country, both decisions that initially worried her considerably. But to her surprise and delight, he had thoroughly embraced a quiet life near an attractive village called Bighton, near Winchester, in Hampshire. Nor was it the too-quiet life she had feared it would be, with several new friends and visitors and delightful neighbours.

She had never imagined for a minute that Robin would embrace a whole new hobby – let alone gardening – which now took up a large part of his time every day. And it was a pleasant daily ritual to manoeuvre her new Cirrus Plus electric wheelchair around the specially paved paths along the borders that had replaced the gravel ones as soon as they had moved in, gravel being a wheelchair’s worst enemy.

Nor had she ever visualized owning a dog – ‘Ben’ – a retired police Alsatian, or one with such a delightful nature, touchingly dividing his time between her and Robin. Neither of them had ever wanted a dog in London, not with the wretched business of having to scoop up excrement from the pavements. But now neither of them could imagine life without one.

So much had changed since they had come to Hampshire – even Robin’s appearance. She had only just got used to him sporting a beard, and often wearing dark glasses – even when it wasn’t sunny – and almost always seeing him in informal clothes – obviously protecting his identity as many retired police officers did. And she had been amazed and touched by his attention to the house and the time he had put into the renovation plans on her behalf.

Everything both outside and inside had been adapted to make her life easier – a bedroom for the two of them downstairs with an adjoining shower room, ramps at every doorway, two more bedrooms upstairs for when their two sons and granddaughter or friends came to stay, and a large and specially adapted kitchen with everything in easy reach – not least the vases that she filled each week through the summer with flowers that Robin proudly brought in from outside.

She had been watching the television with the Wimbledon final between Andy Murray and Novak Djokovic, wishing that Robin liked tennis as much as she did but delighted he enjoyed his days outside, and turning up the volume to drown out the sound of the mower.

It was a thrilling match, the most exciting she had ever watched. Halfway through she had glanced out of the window and seen a tall stranger approaching Robin at the far end of the lawn, immediately assuming it must be the chap who was coming to help him to clear the shed. About time too, she thought. Six months after moving in it was still full of things from their London house that neither they, their sons or any of their friends wanted, mostly what people now deprecatingly called ‘brown furniture’.

An hour later, and with a great victory for Murray, she had steered her chair towards the kitchen to start preparing supper – always a pleasant ritual with the home-grown vegetables that Robin brought in regularly. Life was still good, she thought to herself.

Liz Cowley, whose family comes from Connemara, is a long-time fan of poetry, she enjoyed success with her first collection, A Red Dress, published in 2008 and her second, What am I Doing Here? (2010), which were then made into a theatrical show. Her next book ‘And guess who he was with?’ published in 2013, and two poetry books for gardeners, Outside in my Dressing Gown, and Gardening in Slippers, are bestsellers. Serial Damage was her first novel.

Her latest thriller, Locked in Fear, written with Donough O’Brien publishes in March 2020.

Donough enjoyed a successful marketing career in Britain, Ireland and the US. His previous books include Fame by Chance, Banana Skins, Numeroid, and In the Heat of Battle: a study of those who rose to the occasion in warfare and those who didn’t. His latest historical book was WHO? The most remarkable people you’ve never heard of. He has co-authored thrillers Peace Breaks Out with Robin Hardy and Serial Damage with his wife Liz Cowley.

His latest book Locked in Fear will be published in March 2020.