Dissard addresses important topics in ‘Not Me’. No one much likes to read about bulimia—Dissard herself recoils at even the sound of the word (‘That ‘b’ followed by a pucker-face ‘u’, like a mouth opening and spewing ugliness’). We are better acquainted with anorexia, the more ‘aesthetic’ or normalized eating disorder (ED), but in the UK 40% of the approximately 1.25 million people with an ED suffer from bulimia. And the numbers of those over forty, men and women alike, who suffer from EDs is also rising.

But ‘Not Me’ is not just a recovery memoir about Dissard’s struggle with ED. Approximately 1 in 4 people in the UK will experience mental ill-health each year but the numbers are worse in the arts. A 2014 survey published by Help Musicians, the leading independent UK music charity, found that 60% of musicians had struggled with their mental health, compared to 25% in the UK as a whole.

‘I got worse the more I was on stage, exposed but performing a role. And the more I toured, the less I had any sense of “home”. Call them addictions, mental ill-health or self-directed delinquencies, these conditions all share a bedrock of isolation, guilt and shame. Frightfully alone in sickness as in recovery, I did it my way—a modern curse’, says Dissard, ‘but many are not as lucky’.

‘Not Me’, despite lifting the veil on some rarely-exposed aspects of eating disorders, is also the story of a dedicated yogini learning to give of herself as a yoga teacher. ‘Yoga had long been my raft on tour as in “real” life,’ Dissard notes, ‘but yoga in itself is not what “saved” me’. At the end of the book, Dissard fatefully ends up in Ramsgate where she finds not just a more stable home—ironically, on a wooden sailboat—but a community and the meaningful connections to vanquish isolation and sustain a permanent recovery. 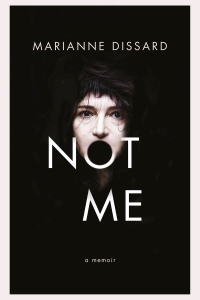 an album of recorded songs

The dry air wheezes through my throat. I breathe through the mouth. I can’t use my nose, the cavities inflamed or stuffed up, likely both. Reaching out for the bathroom sink with both hands, I pull myself up. My body tightens with pain, burned and bruised on the inside. Plaster loosening, the sink wobbles, its screws grabbing at dust. I make the same mental note I always do at this point: Get it fixed.

Good girl. Now file the note away. You won’t act on it anyhow. What matters is you’ve made a note. Note for note, bonne note, always the A student. Pride, and maybe once the joy, but daddy’s not around, there’s no one around to keep track of the outcome. You can get away with murder.

Nothing. I see nothing in the mirror. No mirror either. I’m facing the mirror—that, I know—but I can’t see it, or myself in it. Right this second I can’t see anything. Why didn’t I notice it before getting up? Is it because I stood up too quickly and got lightheaded? There’s a ringing in my ears, and a massive headache pounds the base of my skull. And now the view from my perch is set to bleak—black with streaks of mauve, or is it piss yellow? The color is indefinable. Why can’t I tell? I focus, stare into the darkness and observe starry specks of white pixels in front of, inside of, my eyes. I’ve never seen these before. They burst and move with the languor of seaweeds flicked by a calm sea.

Light sputtering, it dawns on me that I may have done something irreversible. It excites me. It shakes me in the same way the smell of warm blood stirs the carnivorous hunter. The irreversible, the cold truth of permanence, and the end of the burden of choice—hair-raising shit—they animate me all. Could this be my luck? What was different today? Did I really make myself blind?

Think. You gotta cancel the show in Phoenix tomorrow. Must. You have to get out of it somehow. You must find an excuse. Say your Cadillac broke down, the old beast, stuck on an off-ramp in Eloy overnight. You’ve never cancelled a show before. Not this girl. But heed this blindness! It’s a good enough reason to cancel. Right now, you can’t even stand up straight. So? What if you did it anyway, what if you crawled onto that stage and sang your heart out like the butt-ugly blobfish that you are? Oh, wouldn’t that be something? A blistering and unequivocal fuck you to bad luck. Ah, but my voice? Glazed by juices more acrid than turned wine, what sounds would this throat make, words boiled unintelligible from raspy syllables, a wheezing flow of tepid weakness disguised as demure coquetry. It doesn’t fucking matter. You sing in French. They’re Americans. Make sounds, any sounds. It all sounds the same, exotic and sexy, Parisian. Still, wouldn’t someone notice you’d gone awry? They know you, some of them, and some of it. And the photos? You sure don’t look like your press shots anymore. You look simply ravaged.

No one would care. They’d look through me on the fogged stage. Dear audience, you eat up the dream machine, don’t you, and egg me on with your need to dream. Up there under the spotlights, a backlit midget like myself towers taller than a giraffe. Up there, stick figures a mere five feet away from you, we’re fleshed out by a lot of junk thrown our way, puppets whose strings you, dear good audience, will pull and snap along to the music. Just do it, girl. Get on that stage. But is it a private drama or a staged performance, and couldn’t it be both? The entrance fee is fair. Give what you can and buckle up tight. You know you want it too.

Yes, tonight, in my bathroom in Tucson, Arizona, in the winter of 2013, digging into the wound excites me so much that I’m scared. At last, scared of myself! I imagine it is something like pulling the trigger at Russian roulette once, twice, as many times as can be forgotten and they’re all blanks and it doesn’t matter but for the juice of adrenaline and the intoxicating smell of the powder. And then one day at last, it’s a live bullet and that’s really, really thrilling and you want to do it again because you like feeling the hardness of the truth but you’re dead; you just died and it’s too late, you’re not around to tell the truth. Couldn’t anyone tell you it always ends that way?

Warmth, a softness. I feel something, a silky coat, brushing along my calves. Cat. I kneel on the cold tiles, my back to the toilet bowl, hands reaching out to grab and pull Cat onto my lap. Chest tight, I try to breathe more deeply. We nuzzle. I am close to tears. In and out, full and empty. I try to think about breathing and just breathing. After some time, the ringing in my ears siphons away, my vision returns, and I begin to make out the rims of Cat’s ears and inside them, a white fuzz, jumbled like the hair that sticks out from an old man’s nostril. Stripes of gray and black fur come into focus around her eyes and I look into the slits, narrowing, of two huge, yellow-green irises. Cat, my Cat. My striped six-toed domestic shorthair American tabby Cat belts out her Yo! meow, in the way that roughly translates as “Yo, you! Feed me. ’Tis that time. All else will pass.”

For years, Dissard orchestrated her public life as a performer around her private disordered world. In 2013, at the end of her rope, she flees her hometown of Tucson, Arizona to seek solace back in Europe, a continent she’d left at age sixteen. In Paris, Dissard latches on to an intensive yoga teacher training to turn her life around.