From the acclaimed Author of ‘The Butterfly Room’ comes a powerful afterlife drama conveying how great gifts can be hidden in death and how they can bear fruit in our lives if we have the faith to let them unfold.

Somewhere between the mountains and the mist in Simla, India a widower must reconcile himself to the loss and grief that haunts him after the recent death of his wife.

Unhinged by grief, anger, and guilt, John Perera has set off on a journey, a journey to honour the love of his life and to fulfil the promise he made to her to uncover the truth behind the mysterious death of their son. It is a journey of extraordinary self-discovery that will take him to the extremities of his soul and question all he believes about life, death, and faith. 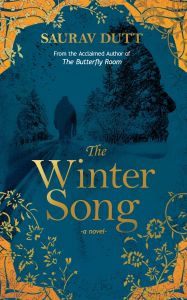 It’s definitely more leaning towards the early morning and after midnight, and that’s to do with solitude and getting your thoughts together. Early morning is a wonderful time to collect your thoughts and you feel your energy and mental strength coming together, also having had the night to digest your thoughts and motivate yourself. Location wise it’s my devoted study or even in bed with my laptop.

I always listen to music to set the mood and amplify my thoughts, get into the mood of the characters and the narrative. Books are written soundtracks to life in the same way that music is and depending on what you’re writing, music can bring your hidden thoughts to life and allow you to fly.

My range of herbal teas has replaced a good glass of wine and whisky, that’s for the morning shifts, and the greater the variety of flavours you have the more it keeps your mind concentrated on what you’re doing. It’s important to have that drink to hand as writing is a marathon not a sprint and you want to have those drinks to hand so you’re not interrupting your flow constantly.

This is a difficult question but ‘The Kite Runner’ by Khaled Hosseini truly was transcendental. Many books are unfortunately fairly mediocre, and the beauty is often not in those that fall of the tongue immediately. This book was extremely successful but hardly glitzy yet it’s a remarkable balance of character, narrative, emotion, and cinematic flourish, it’s a captivating read and very hard to put down. I felt the same way when I read ‘The Exorcist’ as well, for similar reasons.

I would hope not, it’s an instrument that can and should be played as the author sees fit. The nature of publishing and audience sales may change, as it always does, but the writer should remain fastidious about what their vision is and stick to that.

I always do this and usually on thoughts and memories long buried, some quite unpleasant in fact. This process often mirrors characters in films as well, I find that route of finding my own characters fascinating.

The smart phone has replaced that but yes if an idea, a sentence, a phrase, a title comes up, then it’s great to have something to hand as inspiration can come from the most unlikely of places so you have to be prepared.

Science-fiction, that is sci-fi that takes itself too seriously, it is after all highly unrealistic and fantastic, so you might as well have some fun with it, not treat it like it’s Gogol.

Stephen King, simply because he is brimming with ideas, energy, zest, and passion for life and his art, and Salman Rushdie for his remarkable imagination and vocabulary.

It would be a place that has been scarred by history, for better and for worse, that it’s left its imprint on the society, the people, the culture, you can feel the vibrations in the air have changed. You can’t find that everywhere but some places hold history in the air, like India, Polynesian Islands, Cambodia, for instance.

Saurav Dutt is an Author, Political Columnist and Human Rights Campaigner. A journalist in three continents, his acclaimed debut novel ‘The Butterfly Room’ explored issues of domestic violence and homophobia within South Asian communities and has been showcased alongside leading political figures and human rights campaigners. His work for human rights and charity campaign work has taken Dutt to speaking engagements at the WEF, IKWRO, IWN, Houses of Parliament and TEDx.

After exploring the issue of psychological abuse and domestic violence in ‘There Is A Light That Never Goes Out’ Dutt was commissioned by a major Hollywood production house to pen the official novelization of the major motion picture ‘Tiger’ (starring Golden Globe winning and Academy Award nominated actor Mickey Rourke) and he commemorated the centenary of the infamous Amritsar Massacre in India with ‘Garden of Bullets: Massacre at Jallianwala Bagh’ which was featured in TIME magazine. TIGER is the biographical account of Parminder Singh Nagra, a trailblazing Sikh boxer who fought successfully for the right to compete in the ring with his beard, an essential part of his faith.

A syndicated political columnist, Dutt writes for the International Business Times, The Times of Israel, Human Events, and American Herald Tribune. He has featured on CNN, GQ, Huffington Post, Business Insider, BBC television and radio, RT (Russia Today), Press TV, Sky News, and more. He has been shortlisted several times for the Asian Achievers Awards and Asian Media Awards. He resides in the United Kingdom, Los Angeles, and India.