After yet another failed romance, twenty-six-year-old Callie Fulbright is giving up on love. She’s determined to throw all her efforts into her very own, brand-new café: The Cosy Kettle. Serving hot tea, cherry tarts and a welcoming smile to the friendly locals proves to be the perfect distraction, and Callie feels a flush of pride at the fledging business she’s built.

But her new-found confidence is soon put to the test when her gorgeous ex reappears in the quaint little village. She’ll never forget the heartache Noah caused her years ago, but when they bump into each other on the cobbled streets of Honeyford she can’t help but feel a flutter in her chest…

As Callie and Noah share laughter and memories, she starts to wonder if this could be her second chance at happiness. But when Callie discovers that someone is mysteriously trying to ruin the café’s reputation… she has an awful suspicion that Noah knows who’s involved.

Was she wrong to ever trust him again? And can she find out who’s behind the lies and rumours, before it’s too late for the Cosy Kettle? 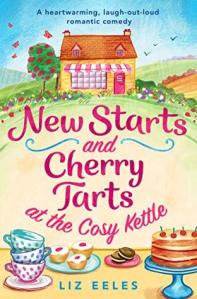 I really can’t resist picking up a book with a cover like this one and who does not like cherry tarts? I most certainly do. (and other cakes as well to be honest lol)

The title of the story says it’s about new starts and that is the case for more than one character featuring here. It’s wonderful to see people coming out of their shell, standing up for themselves and speaking their minds and others realising the way they were acting was not the right one.

The setting is a lovely, little village and the atmosphere is totally filled with cosiness, friendship, family, a touch of suspense and of course what’s this genre without a bit of romance?

The perfect read on a windy day or on any day to be honest. 5 stars.

Liz began her writing career as a journalist and press officer before deciding that she’d rather have the freedom of making things up as a novelist.

Being short-listed in the Corvus ‘Love at First Write’ competition and the Novelicious search for a new women’s fiction star gave Liz the push she needed to keep putting pen to paper …. and ‘Annie’s Holiday by the Sea’ (her first published novel) is the result.

Liz lives on the South Coast with her family and, when she’s not writing, likes to spend time walking by the sea, and trying to meditate. Her ambition is to be serene one day …. she’s still got a long way to go.