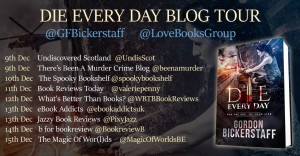 DIE EVERY DAY For the rest of your life …

A woman is murdered in a Glasgow city hotel room. Police have everything they need to charge a suspect. Caught at the scene, he confessed, and he’s filled with guilt and remorse. With undeniable evidence; the police expect him to plead guilty.

Rumours suggest the man will plead not guilty and tell his story. If he faces trial, the truth will cause international outrage and the government will fall.
Faceless mandarins in corridors of power are determined he will remain silent.

Lambeth Group agent, Zoe Tampsin, is ordered to make him plead guilty. What she discovers will crush her soul and place her next in line to be murdered.
Who is pulling the strings? What secrets are they hiding?

Zoe rubbed her temple. ‘Shawlens said Hazel received a document from an informant. There has to be something else. I sense he’s given us everything he knows. We’re done with Craigie.’

Toni cut Craigie’s binds and stood back as he rose to his feet. She pulled a field dressing from a medical kit and handed it to him. He covered the cut on his arm.

Zoe checked the time. ‘Later this morning, I return Shawlens to the police. The Willsening murder team will gain new feet. You have until then to disappear. If Dixon doesn’t rat on you; you’ll have more time.’

Zoe said, ‘I’ve kept my side of the bargain. Don’t make me regret this decision.’

He lowered his head, marched to the door and slammed it shut behind him.

Craigie dashed inside holding a pistol between his hands. He’d lifted Manny’s Glock from the corridor. It fell when Craigie dragged Manny into the hall. He had another pistol in his waistband. A small pistol he had for a backup.

He jerked the Glock between Zoe and Toni. ‘Drop the weapons,’ he shouted.

Zoe and Toni had taken positions five metres apart. They had raised their pistols to head height and aimed them at Craigie.

Zoe remained calm. ‘Mexican standoff. You shoot her. I shoot you. You shoot me, she’ll shoot you. Either way you die. Put the pistol down.’

Craigie aimed his pistol at Zoe. ‘I don’t care so long as I take you with me,’ he said and pulled the trigger. Click! Click! Click!

Toni laughed. ‘Dumber, if you had a brain, you’d know I’d expected this to happen.’

Toni opened her hand and showed him the Swiss Army knife in her palm. ‘I expected you would check the clip was full. That’s why I broke the Glock down and dislodged the pin.’

Zoe showed him a determined look. ‘Now, I know you’ll not keep your side of the deal.’

I was born and raised in Glasgow but spent my student years in Edinburgh. On summer vacations, I learned plumbing, garden maintenance, and I cut the grass in the Meadows.

I live with my wife in the west of Scotland where corrupt academics, mystery, murder and intrigue exist mostly in my mind.