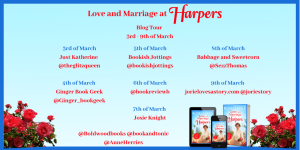 The shop girls of Harpers Emporium on Oxford Street are
happy in their work and their lives are moving on at quite a pace.

United by the suffragette cause and now living under one
roof, some will find love and marriage whilst others experience heartache and
tears.

Harpers is the bond that holds them together, bringing
strength through hardship and pain and friendship and love. 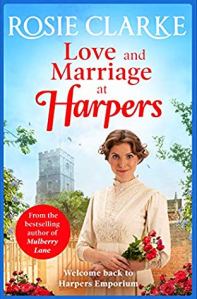 ‘Have you heard the stunning news?’ Rachel Craven asked Sally Ross when she entered the kitchen of the apartment they shared with Maggie Gibbs and Beth Grey on the morning of 21 February 1913. All of them were employed at Harper’s, the new department store in Oxford Street, and the arrangement to share a flat had worked out well for the four friends who had met when applying for posts at the prestigious store.

Sally took off her coat and flung it over the back of a chair.

‘I don’t believe I would have the courage to do what Emmeline Pankhurst did…’ Rachel went on as she turned down the gas under the saucepan she was tending.

On 19 February, Emmeline Pankhurst – and some unnamed accomplices – had blown up a villa being built for Lloyd George near Walton Heath Golf Club and the papers were filled with the atrocity and up in arms at the way the suffragettes had become so militant. The story had knocked the news of Captain Scott’s failure to reach the North Pole off the front page.

‘I’m not sure I’d want to.’ Sally flicked her pale blonde hair back from her eyes. The wind had blown it all over the place, because it was longer than usual. ‘It was brave, of course, because she could easily have blown herself up instead of Lloyd George’s new villa – but what does it achieve? She will go to prison and I don’t believe she has advanced the Women’s Movement one inch. In fact, she will have a lot of influential men thinking we’re a bunch of lunatics… and if she’d been a few minutes later, innocent workmen would have died.’

Rachel agreed with Sally, though her loyalty to the leader of their movement made her reluctant to give voice to her opinion, even though Emmeline had become too militant of late. They had both joined the Movement for Women’s Rights the previous year and often attended meetings. Lately, however, some of the speakers had been too fiery and were often booed by men who came just to disrupt the proceedings. Sally had gone on to the stage at one point at a recent gathering and told the listeners that she thought they should have non-violent protests and march to Downing Street and the palace with their banners, but she drew the line at using bombs. She had been shouted down by some of the more vociferous members.

‘I think the Women’s Social and Political Union is going too far, Rachel, and I shall not attend their meetings again – only those of the less militant branch, the Women’s Rights Movement, which is what we all thought we were part of when we joined…’

‘Yes, you’re right, of course you are. The Women’s Social and Political Union is far too militant for us and I shall not attend their meetings in future either.’ Rachel smiled at Sally approvingly as she deftly changed the subject, not wanting to get bogged down in politics. ‘I like the colour of your new blouse – what do they call that colour exactly?’

‘York tan – at least that’s what the salesman called it. I bought some stock for Harper’s fashion department and liked them so much when they arrived that I purchased one for myself…’

‘Very smart!’ Rachel turned back to the gas cooker where she had some potatoes boiling for the supper they would share with Beth and Maggie, when they arrived. ‘I bought some boiled ham for our tea to have with mashed potatoes and sliced carrots.’

‘I’m glad it’s your turn to cook supper and not mine.’ Sally sighed heavily.

‘Are you all right, Sally?’ Rachel asked, because the younger girl looked tired. ‘It was a bit much, Ben Harper and his sister Jenni making you the buyer for Harper’s without enough training, but now they’re both in America and that makes a lot of work and responsibility for you.’

Ben Harper, the owner of Harpers store in Oxford Street London, had been gone for more than five months and Rachel thought that was disgraceful. It seemed to her that he’d simply abandoned ship, leaving it to his managers and Sally to cope with the buying and running of the shop, which Rachel believed unfair.

‘Jenni Harper writes me long letters giving me advice and if I need anything urgently, I send her a telegram and she always helps.’ Sally shook her head dismissively. ‘When Jenni was last over just before Christmas, she told me that her brother is anxious to return but can’t at the moment.’

‘What sort of business

Rosie Clarke is a #1 bestselling saga writer whose most recent books include The Shop Girls of Harpers and The Mulberry Lane series. She has written over 100 novels under different pseudonyms and is a RNA Award winner. She lives in Cambridgeshire. 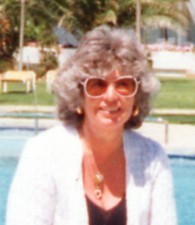