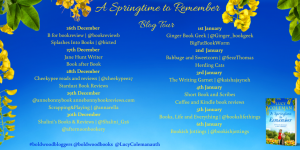 Paris and the Palace of Versailles have always meant a lot to TV producer Lexie. Her grandma Viv spent a year there, but her adventures and memories were never discussed, and Lexie has long wondered why they were a family secret.

When work presents the perfect excuse to spend Springtime in Versailles, Lexie delves into Viv’s old diaries and scrapbooks, and with the help of handsome interpreter Ronan, she is soon learning more about the characters that tend to the magnificent gardens, now and in the past.

In amongst the beauty and splendour of the French countryside, a story of lost love, rivalry and tragedy unfolds.  Can Lexie and Ronan right the wrongs of the past, and will France play its tricks on them both before Lexie has to go home? Will this truly be a Springtime to Remember…

‘Once upon a time there was a little girl who had a very big dream.’

‘How big?’ Little Maisie stares up at me questioningly. Surrounded by a mantle of shadows in the darkened room, only the tiny shaft of light seeping in from the landing allows me to see her baby-blue eyes. She’s determined not to give in to sleep, but it’s obvious she’s fighting a losing battle.

Maisie blinks in rapid succession and already her breathing is beginning to slow.

‘Hu-u-u-uge.’ The sound of my soft whisper fills the air. ‘And she promised herself she would never, ever, let anyone deter her from trying her hardest to make everything she wished for come true.’

I glance down at my darling niece and catch a fleeting glimpse of a smile before sleep finally whisks her away. Hesitant to make a move for fear of disturbing her, I decide to sit for a while, fascinated by that perfect little heart-shaped face. It tugs on my heart strings as I realise how much I’m going to miss her this spring.

As I’m about to ease myself up very gingerly off the bed, to my complete surprise her little voice suddenly rises up out of the darkness.

‘When you come back you will tell me all about your adventure, won’t you, Auntie Lexie?’

I reach across to smooth a few strands of hair away from her warm little cheek.

‘Of course, I will. And it will be a story of palaces and kings and magical gardens that stretch out as far as the eye can see. Now go to sleep, beautiful girl, and keep a tight hold of Mr Panda, because he will keep you safe until I get home.’ She snuggles her rather threadbare companion even closer.

Stooping to plant a kiss on her forehead, I notice she’s fallen back to sleep. It’s hard not to feel sad, because when I return, she’ll probably have grown another inch and I will have missed so much. Even a few months can see so many changes in a five-year-old and

she’s growing up way too quickly. Maisie is an old head on young shoulders, and takes after me, rather than my sister, Shellie. Much to Shellie’s annoyance.

I creep out to find my older sister in the kitchen, sitting at the breakfast bar leisurely reading her Kindle.

‘That was quick, but Maisie was exhausted. Swimming always has that effect on her. She’s going to miss you, you know.’

Shellie holds up her empty coffee mug and shakes it at me. I nod, sinking down onto the stool next to her as she jumps up and heads in the direction of the coffee machine.

‘I know she’s only a phone call away, but it won’t be the same. She’s my little buddy. You made a special one there, sis.’

Shellie laughs. ‘Well, I might not have attained the lofty heights of ambition and fame that my baby sister and my older brother have, but this is the life I wanted, so I’m happy.’

I studiously ignore the reference to our estranged brother, Jake. Success often comes at a price and, in his case, it went to his head. I guess family doesn’t mean much if your ego tells you that you’ve outgrown the people who love you.

Reining in that little surge of anger his name always invokes, I watch Shellie as she moves around the kitchen. With baby number two due in seven months’ time she’s in her element. I know she’s impatient, ticking off each precious day on her calendar at the thought of giving Maisie a sibling. Shellie is a mini version of Mum, whereas Jake and I take after our late father, Paul.

Chrissy, our mum, has always been the rock of the family because Dad was often away travelling, or home working late in his study. They were a team, though, and she was a bigger part of his success than most people realise. And because they were both happy in their respective roles, I can’t remember them ever having a cross word.

Dad was someone who grabbed every opportunity and was determined to live his dream. Was he a little self-centred? Well, yes, I suppose he was, because as soon as he was away, it was as if we didn’t really exist for him. But on his return, Dad would thrill us with stories that captured our imaginations and fired our enthusiasm.

Dad was lauded as one of the top wildlife photographers of his generation, and he lived for the thrill of capturing that perfect shot. With a long list of magazine articles and natural history programmes to his credit, he was always in demand. The fact that he died while doing something he loved seemed fitting in a tragic sort of way.

I remember the day of the fateful call and the phone falling from Mum’s ear as she struggled to take in the devastating news. Dad had a massive heart attack while filming on location in Tarangire National Park, in Tanzania. If only it had happened in the UK, maybe we could have…

‘You haven’t heard a word I’ve been saying, have you, Lexie?’

Shellie appears in front of me, proffering a mug of steaming coffee and one of her delicious, homemade chocolate and beetroot brownies.

‘Sorry. My head is all over the place right now. So many last-minute things to do before I fly out tomorrow.’

She eases herself up onto the stool alongside me, frowning.

‘No regrets? I mean, you’re always heading off somewhere or other, but this is the longest stint in one go. I know there’s a lot at stake for you personally on this one.’

I burst out laughing. ‘A lot? You could say that. I’m sinking every penny I’ve saved into this, and it’s my one-time shot.’

Lucy Coleman is a #1 bestselling romance writer, whose recent novels include Snowflakes over Holly Cove. She also writes under the name Linn B. Halton. She won the 2013 UK Festival of Romance: Innovation in Romantic Fiction award and lives in the Welsh Valleys