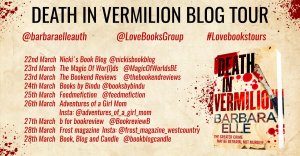 A psychological thriller about murder among friends and enemies.

Who can you trust?

Leila Goodfriend is laying down the bones of a painting. When interrupted by Iris, the noisy, unlikeable artist in the studio upstairs, Leila is distracted and annoyed.

When she discovers the racket was actually Iris’ dead body hitting the floor, Leila becomes obsessed: Who murdered Iris?

The other Red Barn Cooperative artists — competitive, jealous and hypocritical — are prime suspects. They all hated Iris. “An artist owes his life to his art,” Iris said.

Iris was good for a laugh. But no one is laughing now.

In this gripping mystery, new author Barbara Elle paints a clever and twisted picture of women and sisters, whose lives are entwined by a brutal murder in a charming Cape Cod town. 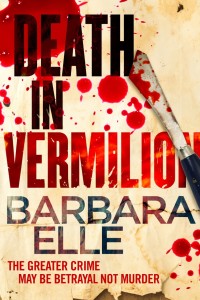 There was no glance more cutting or cruel. The narrowing of unsympathetic eyes a shade of cool, blue slate, like Dylan’s on the cover of Highway 61 Revisited.  The imperceptible flare of nostrils, followed by a slow yoga exhalation in Savasana, the corpse.

Leila Goodfriend was laying down the bones of a painting. She took a step back from her easel. A no-name clam shack clung fearlessly as a barnacle to the edge of the old East End pier. A forlorn wooden structure, barely bigger than a Punch & Judy puppet stage, had withstood the fierce winds whipping off the water in the dead of winter. The pier was deserted. Anyone could paint a sunny day.

After outlining the shack in ghostly charcoal strokes, she stood, hand on hip, poised with a palette loaded with Payne’s Gray and Raw Sienna for the sky, a transparent manganese blue hue for waves in the water, Van Dyck brown and Burnt Umber for the pier’s planks and Naples Yellow Hue for the fading sun.  Flake white blobs dabbed in the foreground could be gulls, or children, or discarded clam containers. She hadn’t decided which. Leila loved that shack, the rough pier, and the view of dotted Race Point Lighthouse off the distance. Painting was all about execution, feeling a connection to the subject, the composition, the angles of light. Though local artists mostly painted popular summer scenes of boats and beaches.

That’s what the summer birds, vacationers who nested in the Cape Cod dunes from June until the end of August, bought.

Her husband Joe dubbed them the dorks of summer. Leila didn’t care what unflattering name Joe had for them, or whether the summer birds cared as much about this place she called home as she did. She wanted to sell them a painting capturing what she loved about this place.

If she was lucky, and painting was largely a matter of luck, random strokes on the canvas would become a painting, At the Clam Bar: Succulent Bellies and Strips. If one of the summer birds bought her painting, she’d be happy. Even the most dedicated of artists needs affirmation sometimes.

A loud whacking thump overhead jarred Leila rudely from her thoughts; the thud traveled like a jolt of electricity down her spine

Barbara Elle fell in love with books and writing at a young age, honing her writing chops as a copywriter at major publishers publishers and as a freelance journalist.

Barbara Elle continues collecting characters and plots, often traveling the world with her touring musician husband, bass player and musical director for rock and roll icon Cyndi Lauper. In her travels, Barbara has explored Buddhist temples in Beijing, crypts in Vienna and Kabuki Theater in Tokyo. 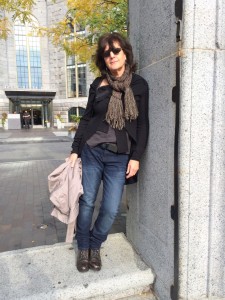