Adam’s deepest wounds are abandonment and betrayal. He’s spent years searching for that special someone who can fill his desolate world with love and trust. He thought he’d found her once, but instead got dragged into a dangerous criminal underworld that tore his wounds wide open and left him broken.

But as he falls in love, Adam fights back hard and fast against the darkness that surrounds him. Fidelity, bravery, and integrity become his values, and he’s sticking to them. That is until he meets Ella, the tender-hearted soul mate he’s yearned for. Now suddenly there’s more at risk than just himself.

Adam’s an all or nothing kind of guy. How far will he go to keep Ella safe? And will Ella have enough faith in him to love him anyway?

She’s got to still be here! I shove my car into park, wrench the keys out of the old-fashioned ignition and run, leaving the door wide open and sprinting across the lot. Where is she? Damn it. I hope like hell that Juan isn’t here already. I’d bet money on it that Rita is with Antonio and Juan is out for his blood. Seeing her get hurt scares the shit out of me, and I won’t see Rita get caught between them if I can prevent it. She’s not well; she needs someone to look out for her. The guy’s a lying bastard, a drug dealer and a snake, but I can’t stand back and watch him be killed, and apparently, neither can my girlfriend Rita. My girlfriend who’s been sleeping with him.

At the hole in the wire fence surrounding the parking lot, I duck through, ignoring the shin splints as my tennis shoes resume their relentless thumping against dried mud. Then I hear her—she’s shouting at someone, but at least she’s here.

This all started yesterday when I found Rita fucking Antonio in front of her two other guards.

Any spark of hope I’d had that we might patch things up… gone in an instant. Right along with my respect and trust. She hadn’t even stopped riding him when I’d blazed into the room, that’s how much I meant to her! When I dragged her off him, though, while Antonio lay there laughing, I realized she was as high as a kite… again. She’d been promising me for weeks that she’d quit it. She admitted the sex was in exchange for cocaine and, just to add another slap to my face, told me she would carry on doing it.

After that I returned home to find her brother Juan standing on my doorstep, ranting that Antonio had stolen one of their avocado shipments they were sending to my father’s farm. The avocados are big business, so I could understand why he was pissed and had stormed off in a rage, but the loaded gun in his hand was surely overkill, right? If Juan was searching for Antonio with a gun, though, I didn’t want Rita caught in the middle, so I jumped in my car and began a manhunt for her, still concerned about her despite what I’d seen. Twenty-four hours later, I’d gotten a call from a waitress at a bar I’d asked at, telling me where Rita was. So here I am, irrationally trying to protect her even after all she’s done.

I veer around the corner of the bar and skid to a halt, stunned by the sunset shining in my eyes. Streaks of yellow still highlight the clouds as my gaze falls on Rita, kneeling next to Antonio who’s clutching his balls and lying on his side. She’s screaming in Spanish at her brother Juan, who’s aiming a gun at them both. My fears play out in front of me as Rita shields him, confident that Juan would never shoot her. I don’t share her confidence. This has to stop!

I walk now, catching my breath after my run and clutching my side where the knife wound Rita gave me a few weeks ago is starting to smart. I raise my hands as I head towards Juan. Their father, Emmanuel Martinez, catches me off guard as his voice comes from behind me. I hadn’t realized he was here.

Julia Firlotte loves writing gripping stories about strong alphas with big hearts and the heroines who fall for them. Angst and passion, trust and intrigue are fundamental to all of the love stories Julia writes, so regardless of how her characters misbehave, you’ll definitely want to keep reading about them.

Julia has been reading romance novels since she was a teenager and started writing her own in 2018. She has lots of stories in her head, but never enough time to write them all. Julia believes strongly in making her character’s worlds as real as possible and there are many character insights on her website if you’d like to learn more about them.

Julia lives in Southern England with her husband, son and daughter and their five cats and would love to meet you on social media.

Julia is an avid reader of all things romance, and she has read over three hundred books across a variety of sub-genres and tropes and began writing her own novels in 2018. Four books are currently in various stages of editing and completion, the first of which is finished and will be on sale in spring 2020. Julia has always been passionate about language and fiction and has a degree in German and Spanish and an A-Level in English Literature. When Julia is not writing or editing her own novels, she usually has her nose in books by other authors.
: 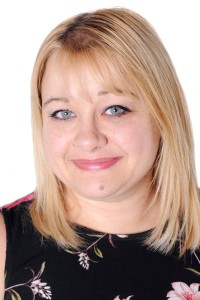