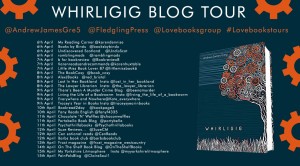 Just outside a sleepy Highland town, a gamekeeper is found hanging lifeless from a tree. The local police investigate an apparent suicide, only to find he’s been snared as efficiently as the rabbit suspended beside him. As the body count rises, the desperate hunt is on to find the murderer before any more people die. But the town doesn’t give up its secrets easily, and who makes the intricate clockwork mechanisms carved from bone and wood found at each crime? Whirligig is a tartan noir like no other; an expose of the corruption pervading a small Highland community and the damage this inflicts on society’s most vulnerable. What happens when those placed in positions of trust look the other way; when those charged with our protection are inadequate to the challenge; when the only justice is that served by those who have been sinned against? This debut crime novel introduces DI James Corstophine – a man still grieving for a wife lost to cancer; his small close-knit team of passed-over police and their quiet Highland town. He’s up against a killer who plays him as easily as a child. For a man whose been treading water since the death of his wife, he’s facing a metaphorical flood of biblical proportions as he struggles to understand why these murders are happening, and who is behind each carefully planned execution. All the time, the clock is ticking. 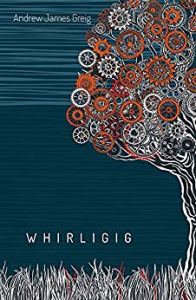 The front door slammed with such violence that the whole house shook, quivering timbers seeking comfort in the cold embrace of stone. Margo tensed in her bed, feeling the floor shake in sympathy. Nervously, she lay waiting for the angry wasp sound of his quad as it disappeared down the lonely track that led away from the isolated cottage. Only when the engine noise had faded did she allow herself to finally relax. He’d be gone all day, setting traps for the rabbits, laying poison for the birds of prey, shooting the mountain hares. Death. Death and violence were all she ever associated him with now.

Her hand tentatively reached out from under the covers and felt her face, flinching as her fingers encountered the bruise around her eye. It wasn’t too bad. She had become a connoisseur of bruises, burns, broken bones. All of them her own. She could tell without looking that her eye would be swollen, the redness around the socket already turning to purple and black as ruptured blood vessels had spilt their red cargo overnight. She mentally ran through the foundation she’d apply, the beauty products she’d accumulated that artfully concealed the worst of the damage. Now that he was gone the nervousness left her like a shed skin, a protective coat that was no longer needed. A butterfly flickered in her womb and the nervousness returned – but this time it was a visceral feeling, this time the nervousness was for a life other than her own.

Margo had hoped, in the way that so many women do, that the announcement she was bringing his baby into the world would change him. Turn him from a sadistic bully into the man she’d always wanted him to be: tender, loyal, loving. Loving. The word hung in her mind like some impossible concept, a young girl’s dream of how her life should have been before it had turned into a living nightmare. Instead, the announcement had only made him worse and whatever demons drove him had been merciless in their response, leaving her concussed and broken on the cold stone kitchen floor. Her first thought had been for the baby, barely more than two months old. The second missed period had confirmed the truth of it to her and the doctor had made it official. She remembered the doctor’s troubled eyes, they had shown concern, worry. “Is there anything you’d like to ask me, anything worrying you?”

Margo had attempted gaiety when she’d responded in the negative, and knew she’d failed when the doctor had lowered her voice to a conspiratorial tone. “You know we’re here to help. With anything, anything at all.” She’d almost run from the surgery, afraid that everyone could see through the artfully applied make-up and see the battered woman underneath.

It was their pity she desperately wanted to avoid. Their pity and judgement delivered with all too knowing eyes. The gamekeeper’s cottage at least offered her the privacy to keep herself to herself, hide herself away, hide secrets that should never be allowed to escape. She swung her legs out over the side of the bed, a sharp intake of breath as a healing rib complained, then to the bathroom to wash and repair what damage she could. Her face stared back at her, expressionless, beaten in spirit as well as in flesh. Margo waited in vain for the tears to flow. They never did these days. She told herself that she was out of tears, but she knew the truth of it. Tears were for those who still had hope, who still gave a fuck, if only about themselves. She glanced down at her belly, too early for any tell-tale bulge to show but she felt different, her breasts felt different. She felt as if she was about to come into flower for the first time in her life and that frightened her more than he did.

Born in London, moved to historic Monmouth as a young teenager and escaped as soon as I could to the bright lights of Bristol where I combined the careers of sober aerospace engineering and libertine sound engineering for as long as I could juggle these disparate and separate worlds.

Now living happily in central Scotland, where I enjoy writing books, playing music and exploring the great outdoors with my best friend who happily is my wife. 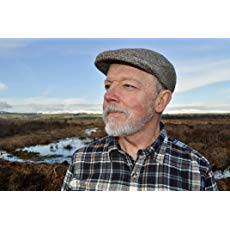