Returning from Moscow, Lorenzo Rossi finds himself forced to quit his job as head of the Vatican police. And to make matters worse, his fiancée, CIA Agent Cathy Doherty, calls off their wedding. Just as Rossi is settling into his new life as a visiting academic at Cambridge University, the CIA persuades him to rejoin Cathy in catching the killer of three American billionaires. Barely on speaking terms, the two devise a plan to befriend the CIA’s main suspect.

As they get closer to the suspect and his coterie of friends, Rossi and Cathy realise that they’re being played for fools. But why? Everything points to an international conspiracy. As friends and foes drop dead around them, they arrive at the truth. But to prove it they need to set a trap. A trap that turns them from hunter to prey. Will they survive to tell their tale?

The shooting range was located under the northern access ramp to the Elizabeth Way bridge that crossed the River Cam just over a mile north of the chaplaincy.

Following Robert Morton’s instructions, Cathy entered the twenty-five-yard indoor range through an unlocked door in the middle of the pedestrian underpass. She switched on the lights and glanced about. Concrete floor, white painted walls, girders and columns.

“Is anyone here?” The only answer was the repeating “clip, clip” of vehicles running over the bridge’s expansion joints above her head.

The windowless space was musty and damp. Cathy folded her arms as she moved deeper inside. At the shooting position, a row of narrow desks and a scattering of wooden chairs. Against the far wall, transparent plastic drop-down targets hung like PVC strip curtains in a meat packing plant. I’ll wait in the car, she thought. Then without warning the room went black. Wheeling around, Cathy caught the silhouette of a woman framed by the door lobbing something inside.

“I’m in here,” Cathy called out, as the door slammed.

The smell of burning black powder and a visible flame, sent Cathy diving behind a metal-covered concrete column. Visions of dynamite and death raced through her mind. Then a flash of light and a deafening bang. For sixty seconds, Cathy lay on the dusty concrete floor with a roar in her ears as the range filled with the smell of smoke and sulphur.

Sean travelled the world for thirty years as a mining company executive, living for many years only a stone’s throw from the Kremlin. No wonder he likes to write political thrillers. He also worked for several years in Tashkent, Uzbekistan, where he picked up a taste for Central Asian cuisine and met his wife. Born and raised in Australia, Sean now makes Germany his home. 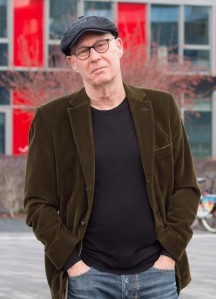