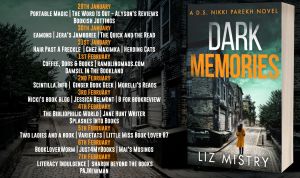 When the body of a homeless woman is found under Bradford’s railway arches, DS Nikki Parekh and her trusty partner DC Sajid Malik are on the case.

With little evidence, it’s impossible to make a breakthrough, and when Nikki receives a newspaper clipping taunting her about her lack of progress in catching the killer, she wonders if she has a personal link to the case.

When another seemingly unrelated body is discovered, Nikki receives another note. Someone is clearly trying to send her clues… but who?

And then a third body is found.

This time on Nikki’s old street, opposite the house she used to live in as a child. And there’s another message… underneath the victim’s body.

With nothing but the notes to connect the murders, Nikki must revisit the traumatic events of her childhood to work out her connection to the investigation.

But some memories are best left forgotten, and it’s going to take all Nikki’s inner strength to catch the killer…

Before they strike again.

Dark Memories is all about how events from the past have consequences that can be quite far reaching and can affect us when we least expect.

The children looked at the door after their mother left, Donatello’s lips trembling. ‘Why does she have to go? Why does he always make her go? He knows she doesn’t like it, Raph.’

By the time the Ninja Turtles’ episode had finished, the room had become colder. The creaking central heating had long since clicked off and the old radiators were making cooling-down sounds. Snow fell outside, illuminated by the orange streetlight. ‘It’s snowing. Shall we climb onto Mummy’s bed to watch the snow?’ Donatello’s tone was hopeful. If they moved onto the big bed, the draught from the door wouldn’t hit them and they’d be able to peek out the window. If they switched off the small lamp, no one would spot them.

Raphael grinned, and in a good imitation of the Teenage Turtle’s New York accent said, ‘All right, Don, but you’ll have to invent a screen so no one can see us from outside.’

They peered through a gap in the curtains, enjoying watching the layer of snow build on the pavements and on the few cars that were parked in their street. Car lights driving up the road made the snow glisten, but as the snow got heavier, fewer cars chanced the shortcut offered by their street, which was on a steep slope. Only a few well-wrapped-up figures braved the weather and the pretend Ninjas watched as their footprints disappeared under the snow.

‘Do you think Mummy’s cold?’

Raphael didn’t know exactly what Mummy did when she went out to work, though one of the lads at school had said their mummy was a slut. Not quite sure what a slut was, Raphael, in true Raphael Ninja style had punched the kid on the nose and had earned a beating from him afterwards for drawing attention to them. Mummy was probably cold, but there was nothing they could do. To distract Donatello, Raphael held out a fisted hand, then grinning, opened it up. ‘I love you enough to give you my last Rolo, Don.’

Cuddling together, they continued to watch the snow until a figure walking up the hill drew their attention as it weaved from side to side, slipping a few times in the slush and getting back to its feet again. As it got closer, Raphael saw that the person carried a bottle, which surprisingly hadn’t broken despite its owner’s frequent falls. ‘Who’s that, Raph? Do you think he’s drunk?’

Raph did indeed think the figure was drunk, and noting worry in Don’s voice said, ‘Don’t worry. Nobody can get in here. Remember we’ve got the key. And you activated the magic screen didn’t you?’

Don, nose pressed to the cool glass, shuddered. ‘Is it him, Raph? Is it him?’

Raph knew exactly who “him” was, but as the figure drew closer, Raph relaxed. ‘No, it’s too skinny to be him.’

The figure tottered closer to their house and then stood in the middle of the road waving the bottle in the air. ‘Come out, you fucking pervert. Where are you? You’re a dirty fucking old perv. A nonce and a pimp, that’s what you are.’

The hood that was obscuring the man’s face fell back, but they didn’t need to see his face to recognise him.

Raphael shrugged. Who knew, but whatever it was, it was bad. Without warning, Dexy made a staggering run towards the pavement in front of their house, arm raised as he propelled the bottle through the air and against their living-room window. The sound of glass shattering was loud. Dexy had fallen to the wet ground and was now trying to get on his knees, when Raphael noticed the door from the house opposite open and a man, pulling on a coat as he ran to help Dexy to his feet.

‘What you doing here, Dexy? You’ll get yourself in trouble. You can’t go about smashing windows. You can see nobody’s home. Look, the house is in darkness. Come on. Come in here with me and we’ll get you dry.’

But as other doors opened, Dexy’s voice rose in volume, and flinging a mis-aimed fist at his would-be helper, he ended up on the ground again. ‘You’re a pervert too. You dirty old git. I know what you did to me… and to my mates too.’ Dexy half turned towards his initial target, now with a broken window. ‘And he fucking organised it. You sick bastards need locking up. Every one of you.’

The erstwhile helper stood statue still, then glancing round at the other neighbours who had gathered and were watching him in silence, stammered, ‘He’s lying. The lad’s drunk. Talking nonsense.’

Sirens in the distance seemed to bring him to his senses and he took a step away from Dexy and, as if afraid to turn his back on him, walked backwards till he reached his gate, before spinning round and hotfooting it into the house and slamming the door shut. Within seconds, his house too was in darkness and the other neighbours were sidling back into their homes, leaving Dexy on the road as a police car drove down the street and parked up.

Dropping the curtain into place, Raphael and Don crawled up to the top of their mum’s bed. Pulling the duvet over their heads, they tried to block out the shouts from Dexy and the hammering of fists on their front door. If anyone found out they were home alone, they’d be taken from Mummy. Hands over their ears, they muffled their sobs underneath the duvet, wishing their mummy would soon come home.

Born in Scotland, Made in Bradford sums up Liz Mistry’s life. Over thirty years ago she moved from a small village in West Lothian to Yorkshire to get her teaching degree. Once here, Liz fell in love with three things; curries, the rich cultural diversity of the city … and her Indian husband (not necessarily in this order). Now thirty years, three children, two cats (Winky and Scumpy) and a huge extended family later, Liz uses her experiences of living and working in the inner city to flavour her writing. Her gritty crime fiction police procedural novels set in Bradford embrace the city she describes as ‘Warm, Rich and Fearless’ whilst exploring the darkness that lurks beneath.

Struggling with severe clinical depression and anxiety for a large number of years, Liz often includes mental health themes in her writing. She credits the MA in Creative Writing she took at Leeds Trinity University with helping her find a way of using her writing to navigate her ongoing mental health struggles. Being a debut novelist in her fifties was something Liz had only dreamed of and she counts herself lucky, whilst pinching herself regularly to make sure it’s all real. One of the nicest things about being a published author is chatting with and responding to readers’ feedback and Liz regularly does events at local libraries, universities, literature festivals and open mics. She also teaches creative writing too. Now, having nearly completed a PhD in Creative Writing focussing on ‘the absence of the teen voice in adult crime fiction’ and ‘why expansive narratives matter’, Liz is chock full of ideas to continue writing.

In her spare time, Liz loves pub quizzes (although she admits to being rubbish at them), dancing (she does a mean jig to Proud Mary – her opinion, not ratified by her family), visiting the varied Yorkshire landscape, with Robin Hoods Bay being one of her favourite coastal destinations, listening to music, reading and blogging about all things crime fiction on her blog, The Crime Warp. 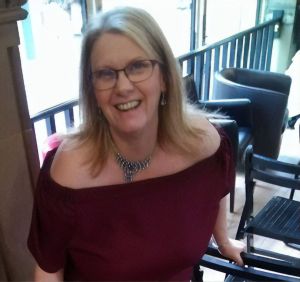