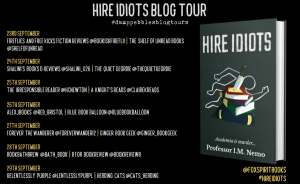 ‘This is a work of fiction. Any resemblance to the living or the dead is purely coincidental and ought to make you ashamed at the comparison.’

Unfortunately, the murder may get lost in the confusion of new vice presidents, marketers, focus groups, assessors and protestors as the administration tries to make education profitable. There’s no time for mystery!

Professor Clarence Van Dyke finds himself bewildered by the changes, but determined to get to the bottom of the killing. He wants his friend to rest in peace – or perhaps he just wants to spend more time with the attractive Detective Riordan. But isn’t he the primary suspect? 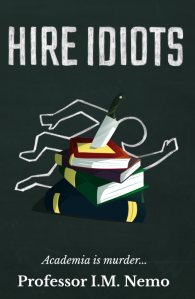 The police tape marked off all the floor where Ned’s office was, which meant that Van Dyke could not get to his office at the other end of the hall either. ‘Can I get something from my office?’ he asked the officer stationed at the steps to glare at anyone even thinking of passing through.

‘What do you need?’ she barked at him with unnecessary vigor.

‘I can’t recall precisely,’ Van Dyke admitted. ‘I know I have some papers to grade and there was a new book to review that just came yesterday—’

‘No one allowed through at present. This is an active crime scene, you know. We don’t need looky-loos.’

The combination of officiousness and homey slang jarred. ‘I’m not a looky-loo. That’s my colleague Ned who’s dead. I am distressed.’ As he said it he had begun to believe it.

That caught her attention. ‘Have you talked to the officer in charge? Can you supply information about the deceased’s movements in the past twenty-four hours?’

‘I haven’t talked to the detectives,’ Van Dyke said, trying to sound knowledgeable. It failed. Informed only by novels and films for the basics of procedure, he couldn’t muster much in the way of expertise. ‘I know some of his movements. We were both teaching yesterday.’

Van Dyke waited, absurdly excited to be interrogated by the police, though rather dreading that they might make him look on the body. The last body he’d had to see was his cousin Ruth who had looked comfortable enough in her coffin, emaciated as a bird but almost with a sort of smile or grimace. That doubtless had as much to do with stiffing all the relatives expecting minor fortunes by giving her legacy to the Royal Birdwatcher Society or whatever it was called. She had always been a spiteful old biddy.

The officer came back and lifted the tape to allow him to bend somewhat stiffly under it. She pointed him toward Ned’s office. In comparison to the shuffling crowds below there was a buzz of activity here. Van Dyke stood nonplussed until a middle-aged woman in a tweed jacket stepped over to introduce herself. ‘Detective Riordan. The officer says you knew the victim?’

‘He’s my colleague. Was my colleague,’ Van Dyke amended quickly, then coughed to hide the fact that he had suddenly come down with an urge to giggle. Maybe it was this rather attractive woman or the absurdity of the moment or just the relief that poor Ned had gone. Gone from the room that is, he added even though the words were only in his head.

That only made him want to giggle more and he made a series of grimaces that he hoped looked like some kind of emotion and not that he was about to give way to some kind of seizure. The police inspector or detective, whatever she was, looked at him with solemn attention which only made him feel more like letting loose with a wild guffaw.

‘Do you know what happened here?’

‘He died?’ Van Dyke felt confused. At least it made the giggles slip away for a moment.

‘Don’t you know?’ Perhaps they were waiting for some lab report or something. Isn’t that what they always said at times like these?

‘Well, we have a good idea, but we were wondering what information you could supply us with.’

‘Detective. But when did you last see him?’

‘Oh, about half six I think. I asked if he wanted to go to the pub but he said he things to do.’

‘Either.’ Her expression had not changed so he didn’t think she was trying to be funny, it just struck him that way. He suppressed another giggle.

‘He would often go to the pub with me, but not always. It was a way to unwind after a day’s teaching.’

‘Do you know anyone who had a reason to want him dead?’

‘I suppose we could rule out Cromwell,’ Van Dyke joked and then wished he hadn’t.

The inspector looked interested. ‘Why do you want to rule out Cromwell?’

‘1658 I think. Or was it ’59?’ Van Dyke could never remember despite all the beatings in school. Dates were not a strong point.

The inspector did not look pleased. ‘Are you trying to obstruct an inquiry, Professor Van Dyke?’

‘Alas, I was just trying to make a joke.’

‘I don’t see the humor in joking about suspects.’

‘I guess you’re not a fan of Irish music or history despite your name? Young Ned of the Hill?’ A blank look assured him he was not hitting the mark with her and that’s when he realized that a big part of the giggles came from wanting to flirt with this rather nice lady who happened to be a police inspector—or rather detective, wasn’t it? He was both embarrassed and absurdly pleased that he still had it in him. ‘Forgive me. It must be the shock. Poor Ned.’

Her expression softened a little. ‘Tragedy can affect people in strange ways. We don’t always know how it will strike us.’

‘And we are put on earth a little space / That we may learn to bear the beams of love,’ Van Dyke intoned to try to flatten the giggle that started to rise again.

‘Poetry?’ the detective asked, as one might inquire whether a dog bit.

This was going to be an uphill battle, Van Dyke could tell. She looked like an intelligent woman but clearly the arts were not her forte. Or did he just say she looked intelligent because she conformed to his idea of what intelligent women should look like? Handsome in a quiet way, not a flashy sort of beauty, refined, reserved. ‘I’m sorry, what?’

Riordan smiled and in that moment he moved her from handsome to beautiful. ‘You’re living up to my idea of the absent-minded professor.’

‘Oh dear, that’s probably not a good thing.’ She probably thinks I’m dotty with age. Well done, Van Dyke. ‘It’s just this is all so strange to me. I’ve never knowingly talked to a police inspector before.’

‘Detective. Can you think of anyone who wanted him dead? Student with a complaint? Colleague who bore a grudge?’

‘Well, truth to be told there were very few people who wished him alive, but no one I can think of who would go to the trouble of making sure he was dead.’

‘There was someone who did.’