A novel of jealousy, muddy shoes and giant barbecues.

Dave Brookman’s new next-door neighbour is ruining his life. Because in a bizarre coincidence, he’s also called Dave Brookman, he’s the same age and he even grew up in the same town. There is one big difference, though – this new Dave is vastly more successful in every way.

As Dave starts questioning everything about himself, suddenly his perfect life seems a lot less than perfect. And what starts as friendly rivalry soon turns into obsessive jealousy and crazy behaviour that could see Dave lose it all.

Can he get a grip before it’s too late? 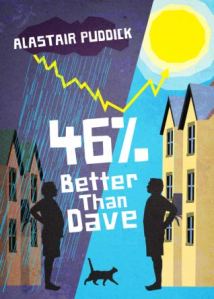 It was a large, wooden structure, around 10 metres long and 10 metres wide. Hundreds of strands of plastic wiring hung from the roof to the floor, like jellyfish tentacles. And just like a jellyfish, they were clearly very painful to touch.

I ran over and joined the queue of people waiting to enter. The screams were much louder now, as people tentatively waded way through the mass of wires. Not every wire was charged, but it was easy to tell when someone found a live one, as they’d scream, shudder and drop to their knees in the mud. It would have been funny, if I wasn’t waiting to wade through it myself.

If ever there was an obstacle I’d want to avoid, it was this one. But I thought back to the steward at the start, and the crowd’s disdain at the thought of skipping challenges. I hadn’t seen anyone else chickening out, and I certainly didn’t want to be the only one. So, I gritted my teeth, moved forward and took a deep breath.

The steward lined up four of us to go in at once. I looked to my four compatriots. A young woman to my left looked genuinely terrified, as though she might start hyperventilating at any second. A slightly older woman next to her was much calmer, looking intently at the dangling wires, as though trying to memorise the live ones and plot a safe route. A young man to my right wore a Borat-style mankini, which was barely visible under the mud caking his otherwise naked body. He jumped up and down on the spot, slapping himself in the face and psyching himself up.

The steward waited until the last people cleared the obstacle, then smiled as he paused a few seconds longer to drag out the anticipation.

“GO!” shouted the steward, and the mankini nutcase bolted full pelt into the electrical field, screaming like a maniac. He made it exactly one step before a live wire caught him and sent him tumbling to his knees, shrieking and shaking. His momentum kept him moving forward into the next live wire, which delivered another sting. He shrieked again, his body juddering, and this just seemed to make him lurch forwards again.

By the time he was nearly two-thirds of the way through, the remaining three of us were still at the start. The woman to the left of me looked even more terrified than she had before she’d witnessed Mankini Man go down. I tried to give her a reassuring smile, but every time the man shrieked, my face twitched. So, I was probably just adding to her paranoia.

The woman to my far left took a deep breath then ventured forward, carefully, methodically, as if she could see a safe route through the wires the rest of us couldn’t. She took one step forward, a live wire caught her elbow and she dropped to the floor, screaming and twitching. She lurched back, breathing heavily and rubbing her elbow vigorously, reassessing her plan, confused as to what had gone wrong.

The scared woman to my left reached forward tentatively, making to part the wires like a giant bead curtain. Just as she was about to make contact with a wire, she snapped her hands back tight to her body, her face grimacing with uncertainty.

I quickly weighed up my options. I could walk through slowly and risk getting caught several times, but I could potentially reassess as I went. Or I could follow Mankini Man’s tactic and just belt through. I’d almost certainly get caught a few times, but like ripping off a plaster, the pain would be over sooner. It was like running through the rain. You probably got just as wet running as you did walking, but at least you got through it and back into the dry quicker.

There was no point thinking any longer, I just needed to do it. So, I took a deep breath and ran. I made it one full step before the first live wire found me, slapping my chest with a searing jolt of pain. It was like being hit with a tennis ball. A thousand small injections administered to the exact same spot at the same time.

I yelped loudly, emitting a high-pitched, whining shriek I didn’t know my body was capable of producing. But somehow, I managed to stay upright, charging on, the momentum keeping me moving. I took another large stride and was hit again, a thousand angry bees jabbing at my left thigh. Another two steps and a painful shock to my back sent me tumbling to my knees. Still, I managed to keep going, wailing and shuddering, and shuffling forwards.

At the end of the obstacle, I could see Mankini Man through to the safe zone, shouting back at me, willing me on. I managed to lift my foot, dig it hard into the mud and propel myself up and forwards again. Another jolt stung my right arm. I’m not sure if it was less powerful, or if somehow my body was getting used to being electrocuted, but it hurt slightly less. And with only a few feet left, it gave me enough forward momentum to launch myself forward, leaping like a rugby player going for a tackle.

Several more wires caught me as I flew through the air, and I shrieked as live wires bit my arms, legs and buttocks. Then I landed hard, face down in the mud, shuddering and juddering, but clear of the wires.

I felt hands on me once more, as Mankini Man lifted me to my feet.

Alastair Puddick is a writer and editor who has spent the past 20 years writing for a variety of magazines and websites. His work has spanned many different paths, from jetting off to exciting cities across the world to writing about dating advice, data centres, facilities management and the exciting world of flooring. He also once wrote an agony advice column posing as Elvis Presley’s ghost.

Alastair still works as a copywriter and lives in Sussex with his wife, Laura, and cat, George. He has written three novels: The Unexpected Vacation of George Thring, Killing Dylan and his newest book, 46% Better Than Dave.