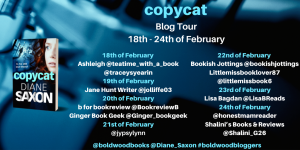 When a beautiful, red haired nurse’s body is found mutilated in her house in Lawley the morning after a date with Detective Constable Ryan Downey, all eyes turn to him.

With a very specific modus operandi, Detective Sergeant Jenna Morgan and her team know exactly who the offender is, the trouble is he’s currently serving a life stretch in HMP Long Lartin.

It soon becomes evident to DS Morgan and her team that there maybe a copycat killer is on the loose.

In a race against time, they need to track down the copycat and discover who is pulling whose strings?

The peace and tranquillity of a suburban lifestyle with the security of neighbours she’d barely had the chance to get to know as everyone worked. Her shifts at The Princess Royal, Telford’s main hospital, rarely afforded her the opportunity to make friends outside her own circle of work colleagues. She’d been happy enough with that arrangement. Until recently. Until she’d been ostracised by half of her work colleagues and the other half treated her as though she was about to break apart. She was.

She stared at the ‘For Sale’ sign in the neat patch of a front garden as it dripped with rain and misery.

The security she believed she had disappeared in a wisp of mist as she glanced at the house that no longer felt like her home. Not since Ray had left.

The fast clench in her stomach had her gripping the phone to her chest.

He may have left, but she’d been unable to stop him from returning.

‘You all right, bab?’ Powerful Birmingham laced the driver’s words. The gentle term of endearment pulled her back to the present while she stared blankly at the taxi driver, her gaze meeting the watery blue of his in the rear view mirror. She remembered where she was. Embarrassment surged through her to nudge away the blur of alcohol. She fumbled as she dipped her hand hastily into her purse for the fare while he turned in his seat to face her.

‘You’re all right, bab. He already paid for you.’ At her vacant stare, the driver nodded. ‘Your young man, back there. He paid.’

Not her young man. Never likely to be. She zipped her purse closed, snapped her phone off and slipped it into her pocket, her gaze pulled back to the dark foreboding of the empty house.

A sliver of dread prickled her skin at the prospect of getting out of the safety of the car. Ray had done that to her. Made her scared of her own shadow, with his sly insistence that she’d lost her mind. The irony of it was, she had succumbed to the insanity of his mind games. His clever little tricks to make her frightened in her own home.

Marcia squeezed her eyes closed and gulped down the scalding acid threatening to bubble up the back of her throat into her mouth. She touched trembling fingertips to her lips and breathed in through her nose as the heat of the Uber pressed in on her, thick and claustrophobic. She dragged in another breath, almost choking on the sweet, cloying scent of the cherry shaped air freshener which dangled from the driver’s rear view mirror and

gave an erratic sway as the driver hefted his large frame out of the car and moved around to yank her door open.

The fast rush of cold draught had her eyes popping open as she heaved in a quick gasp of refreshing air while the biting wind ripped at the thin layers of clothes only suitable for a date in a warm, cosy restaurant, not a late night walk, even if it was only to her front door.

Icy fingers of panic stole along her spine as Marcia shot her gaze up to the darkened bedroom windows in the fear of what Ray may have done while she’d been out. Had he sneaked in to break another cup, move a precious lamp, take away a kitchen appliance? He’d already had the television, leaving her with nothing but her laptop to watch programmes on.

A shiver took a hold of her and she clenched her teeth, her jaw popping in her ears.

‘C’mon, now love, you’ve had too much to drink. I wish you girls would take better care of yourselves.’ An edge of iron had crept into the driver’s voice as he held open the door, his face set in disapproval.

Embarrassed, Marcia stumbled from the taxi, muttering a ‘thank you’ as she tripped along the neatly edged pathway, desperate to escape her humiliation.

Not so desperate she didn’t hang onto the door frame, reluctant to enter the house as her world spun. She should never have drunk so much. She stabbed her key into the lock, only succeeding in inserting it on the third try, aware of the presence of the Uber driver as he waited at the end of her pathway, his engine running. It should have made her feel safe, but the danger wasn’t so much outside where the street lamps cast puddles of light onto the wet pavements. Her fear came from the silent stillness of her own house.

With her back to the lawn, she refused to turn around and look at the single word Ray had burned into it with weedkiller. She didn’t have to look; it was etched on her mind.

Diane Saxon previously wrote romantic fiction for the US market but has now turned to writing psychological crime. The Keeper was her first novel in this genre and introduced series character DS Jemma Morgan. She is married to a retired policeman and lives in Shropshire.