A compelling memoir of post-war Britain. Jackie Skingley grew up with limited career choices but joining the Women’s Royal Army Corps offered her a different life, living and working in a military world, against the backdrop of the Cold War. Packed full of stories reflecting the changing sexual attitudes prior to the arrival of the pill and the sexual revolution of the mid 60s, Skingley’s memoir denotes a shift in the political and social fabric of the era. Follow her relationships with the men in her life from finding her first true love, which through a cruel act of fate was denied her, to embarking on a path of recovery. 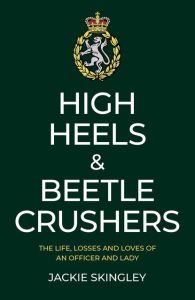 That night, as the north wind buffeted our home, enemy planes crossed the English Channel, flying another sortie to London along Bomb Alley. Inside, cold draughts blew under doors and around window frames. To compensate for the drop in temperature, a coal fire burned and spluttered in the living room. My mother and grandmother, Nanny Rose, sat in deep armchairs on either side of the Victorian fireplace, ears straining for familiar and fearful sounds. First came the undulating high- pitched whine of an air raid siren, followed by the drone of approaching enemy aircraft.

Thud! Thud! beat out the rhythm of falling missiles on the edge of town. Fee, Fi, Fo, Fum, they whistled through the air, shaking the earth on impact like an ogre’s footsteps. The explosions came closer, rattling buildings and causing the houses in the street to tremble. I remember Mummy throwing down the Rupert Bear annual she’d been reading to me, my favourite bedtime story. I knew all the words and, if she made a mistake, I would tell her no short cuts or Rupert Bear, Bill Badger and Algy Pug wouldn’t play their part. I absorbed the coloured cartoon strips while Mummy turned the pages and the world of Nutwood seeped into my memory, a place of magic and adventure. The story abruptly ended, the book flying out of her hands onto the hearthrug, as she hugged me close. Rupert and Bill hadn’t even finished their journey to the bottom of the sea.

‘Quick, Mum, we must go down to the shelter!’ Mummy urged Nan.

I started to cry, cross with Mummy and scared by the screaming sirens. The frequency pierced my brain and induced a fear I’d learnt from grownups; a fear I didn’t understand, the fear of death and dying.

‘Come on, darling,’ coaxed Mummy, lifting me off her lap. She eased forward, her round tummy heavy with the new baby.

I didn’t want to go down into that dark place. I put my hands over my ears and howled. Climbing down the stairs to the Morrison shelter I felt claustrophobic fingers ready to wrap themselves around my throat. One feeble low watt electric bulb lit the cellar. The room had a musty smell mixed with a faint fragrance of dried fruit, and mice would often scamper into Nanny Rose’s stock for her grocery shop. We’d hear the resounding snap of a trap as we lay there in the dark, huddled together, announcing one less rodent to nibble into the currants and raisins.

Too late! The bomb blast shook the house to its foundations, blowing in the taped-over windowpanes behind the blackout curtains. Mummy pushed me under the square dining table and fell on top of me, the unborn baby kicking in protest, nudging me.

‘Mum, come under here!’ she called to Nanny Rose.

‘I’m not moving for blooming old Hitler!’ Nan shouted above the din. Purl one, knit one, clack went her needles in defiance.

The lights failed, the room plunged into darkness. Nan reached for the spill jar, taking out a taper and holding it to the dying embers. She stood up with the burning paper and lit two candles on the mantelpiece. The flames guttered in a sudden breeze, making strange jagged shadows on the wall. Unperturbed by the intrusion, she took up her knitting again. I stopped crying, fascinated by the flickering lights and the waving fringe on the crimson velour tablecloth. Bobbles danced around its edge and swung to and fro like cherries on a tree. I wanted to be under the red tent, an oasis, snuggled up, a place to hide from bad things, rather than in the black shelter, but there wasn’t much room because of Mummy’s tummy.

To me, there was no significance in the fading roar of the Luftwaffe Bombers’ engines. But for my mother and grandmother, time hung, suspended between each breath until they heard the continuous tone of the All Clear. I understood that sound, the sound of relief.

‘Thank goodness it’s over,’ exclaimed Mummy. The frown on her forehead softened, her shoulders relaxed and she hugged me. Her dress shook as the baby’s tiny feet drummed against her womb, sharing the surge of release. We were all safe. Mummy crawled out from under the table, hauling herself up.

‘Let’s have a nice cuppa to settle our nerves before we see to the window,’ she said to Nan, carrying a candle into the kitchen to light the hurricane lamp. I scrambled after her, not wanting to be left alone. Nan laid out teacups and poured water into my beaker over concentrated orange, a health benefit issued to babies and children under five years old during the war. Mummy picked up the caddy Daddy had given her for Christmas and lifted the lid. The calming aroma of tea floated out.

For Jackie Skingley, adventure has been her quest since childhood. Life with the British army allowed Jackie to live all over the world and gain huge appreciation for different cultures and customs. Since 1999, Jackie and her husband have lived in the Charente region of South West France where Reiki, jewellery making, painting and mosaics, as well as writing keep her fully occupied. Member of the Charente Creative Writing Group, mother and grandmother. 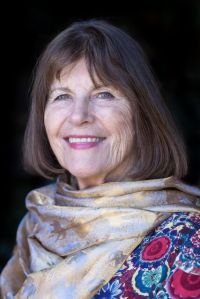