At the peak of her career as lead singer of a legendary 1980s
indie band, Meredith Vincent was driven off the international
stage by a horrific incident. Now she lives incognito in a cottage
on the grounds of Minstead House, an old stately home, whilst
working in the gift shop. Her past is behind her and she enjoys
her new life.
But a series of inexplicable and unsettling incidents have started
to happen around her – broken china, vandalised gardens… And
when a body is found in the gardens of Minstead House, Meredith
realises that someone is watching, someone who knows who she
is and who wants to destroy her…
A dark, riveting and chilling psychological thriller, The Final
Stage is a study of secrets and obsessions, where innocent acts
can have the most terrifying consequences. 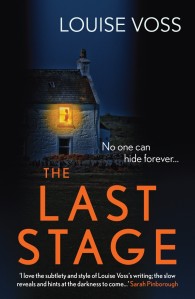 ‘How’s your week been? I brought you some Marlboros…’

Silence. As Graeme slides the cigarettes towards her, he looks nervously across the table at his beloved, whose arms are folded and brows knitted. The black circles beneath her eyes are spreading, the puffy darkness like dual bruises. Catherine ignores the gift.

‘Have I done something to upset you … angel?’

The ‘angel’ is rushed out on fast, feathery breaths, fearing it will be swatted away. A nerve ticks in Catherine’s doughy cheek, pulsing irritation.

‘You look sad,’ says Graeme, trying again, when what he really wants to say is, How can you be sad when we’re together? You are the love of my life, the apple of my eye, the yin to my yang.

He has no idea what yins or yangs actually are. Something to do with seesaws perhaps?

The expression on Catherine’s face is not so much sadness – it’s more bitterness, but all the same, Graeme supposes, it must be hard for his love, watching him walking in and out each week when Catherine herself isn’t allowed to walk anywhere outside of the perimeter fences. Yet. Surely the fact that he visits religiously counts for something? Maybe Catherine doesn’t love him. Maybe these decades of devotion are all a waste of time; maybe their plans and dreams will never come to fruition.

But … they’re getting closer. Catherine’s been good as gold for years – not a foot wrong. And she knows that Graeme would do anything for her.

So why can’t she be a bit nicer to him? Just when Graeme is starting to feel the prickly heat of rejection and paranoia, Catherine raises her head, the effort visible. She reaches across the table and takes his calloused hand.

‘Tell me about our house.’ Finally, she gazes into Graeme’s eyes, and he feels relief flood through him.

He smiles. ‘It’s going to be a cottage, with so much whitewash on the walls that when the sun comes out, it blinds you. We’ll have yellow roses growing up the front walls on either side of the porch – it’ll have one of them little pointy porches with its own roof. We won’t have thatch though – the roofs will be all tiles. I looked into it. You have to renew thatch about every ten years and it costs thousands. Fifteen thou at least, and then you have to get extra insurance and that.’

‘Not thatched then,’ Catherine agrees, staring intently. Her eyes are brown, with a hazel rim to the irises that Graeme finds hypnotic. Catherine’s thumb begins stroking the web of skin between Graeme’s own thumb and forefinger, and his voice trembles.

‘Veg patch in the back garden with everything in it – not just the boring stuff like carrots and tomatoes. We’ll have rhubarb and parsnips and that posh, pointy green stuff, what’s it called?’

Catherine looks blank. ‘You know. It sticks up through the ground, all of a sudden.’

‘I have no idea what you’re talking about.’ She looks bored and Graeme panics. He’s lost her, which in his experience can be disastrous.

The word comes to him: ‘Asparagus! You have it in fancy restaurants with butter and that.’

‘And … and there’ll be dark wood floorboards all through the upstairs. One of them baths with the metal feet that look like animal paws.’

Graeme has an interior-design magazine that he nicked from the doctor’s waiting room. It’s from two years ago and the front cover is missing, but he reads it religiously, holding it like a comfort blanket whenever it seems impossible to think that he and Catherine will ever be together again, that Catherine will ever be released. God knows where they are going to get the money to afford this cottage with its flowers and veg patch and polished floors. Even Graeme realises it’s a far cry from the grim shared flat he’s been living in since his own release. He tucks the magazine in the middle of a pile of bodybuilding magazines by his bed, because every time he gets back from visiting Catherine, something else has been nicked by either the dead-eyed smack addict or the malodorous shoplifter he has to share with. He’s never even set foot in a place like the dream home of his imagination.

‘That’s the fella. And a big white sink. Fresh flowers in every room.’

‘From our own garden.’

‘Gym in a shed outside so me doing weights don’t bother you.’

‘Too right. And … nice, non-nosy neighbours.’

‘Yes we can,’ Catherine argues. ‘We’ll just be careful. But what if we see our dream house but the neighbours are horrible?’

Graeme frowns, giving this some thought. ‘We’ll vet them first. We won’t let anybody horrible stand in the way of our happiness. And if they do … then they’ll regret it, won’t they?’

Catherine laughs again, looks at her watch then stands up. ‘You’d better go. It’s Cash In the Attic soon and I want to watch it. See you next week. Ta for the fags.’

Graeme feels stricken. He opens his arms for a hug, but Catherine is already waddling away

Over her eighteen-year writing career, Louise Voss has had eleven novels
published – five solo and six co-written with Mark Edwards: a combination of
psychological thrillers, police procedurals and contemporary fiction – and sold
over 350,000 books. Her most recent book, The Old You, was a number one
bestseller in eBook. Louise has an MA (Dist) in Creative Writing and also works
as a literary consultant and mentor for writers at http://www.thewritingcoach.co.uk.
She lives in South-West London and is a proud member of two female crimewriting collectives, The Slice Girls and Killer Women. 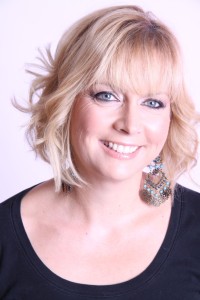