Eager fans around the world played Operation Red Helmet for years, making it the highest-grossing virtual reality game ever sold, and the designers, The Talladav Group, are the richest company on earth.

After an oppressive, unrelenting worldwide heatwave hits, daily life grinds to a halt around the globe. People retreat to their homes, afraid to go out as violence and chaos erupt in the streets. The game temporarily shuts down as the world grapples with the fallout of civil unrest and critical infrastructure breakdowns, forever altering society.

When governments take over control and infrastructures are replaced and back online, the top players of the previous version receive a mysterious box marked, Operation Jade Helmet. The new version is the first-ever total immersion VR experience and inside each box is a free headset and personal code to play a week before release to the general public. The lucky winners don their newest obsession and impatiently wait for the game to begin. Unfortunately, they are about to discover Operation Jade Helmet is unlike any other game, and when the game begins, everything changes. 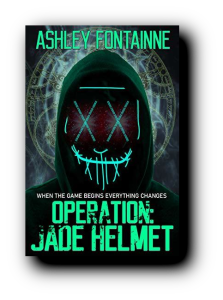 Thank you, Ashley Fontainne and Pump Up Your Book

Award-winning and International bestselling author, Ashley Fontainne, is an avid reader, becoming a fan of the written word in her youth, starting with the Nancy Drew mystery series. Stories that immerse the reader deep into the human psyche and the monsters lurking within us are her favorite reads.

Her muse for penning the Eviscerating the Snake series was The Count of Monte Cristo by Alexandre Dumas. Ashley’s love for this book is what sparked her desire to write her debut novel, Accountable to None, the first book in the trilogy. With a modern setting to the tale, Ashley delves into just what lengths a person is willing to go to when seeking personal justice for heinous acts perpetrated against them. The second novel in the series, Zero Balance, focuses on the cost and reciprocal cycle that obtaining revenge has on the seeker. Once the cycle starts, where does it end? How far will the tendrils of revenge expand? Adjusting Journal Entries answers that question—far and wide.

The paranormal thriller entitled The Lie won the GOLD medal in the 2013 Illumination Book Awards for fiction/suspense. A movie based on this book, entitled Foreseen, is currently a feature film available on video-on-demand from Amazon.

Ashley delved into the paranormal with a Southern Gothic horror/suspense novel, Growl, which released in January of 2015. The suspenseful mystery Empty Shell released in September of 2014. Ashley teamed up with Lillian Hansen (Ashley calls her Mom!) and penned a three-part murder mystery/suspense series entitled The Magnolia Series. The first book, Blood Ties, released in 2015 and was voted one of the Top 50 Self-Published Books You Should Be Reading in 2015 at http://www.readfree.ly.

Tainted Cure, Tainted Reality, Tainted Future, and Tainted World are the four books in the post-apocalyptic/zombie genre, The Rememdium Series, all released to rave reviews for a fresh take on the zombie genre.

Ruined Wings is about a young woman’s descent into drug addiction and is currently a short film. The movie is free to watch and share with others in hopes of starting a positive dialogue regarding addiction. https://ruinedwings.com/

The Legion Series ~ Many ~ Madness ~ Mayhem released in 2019-2020 and delves with the struggles people face with demonic entities.

Sign up for Ashley’s newsletter and receive a free ebook! https://ashleyfontainne.net