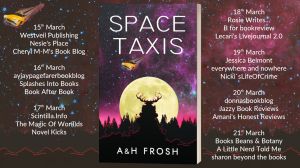 “A perfect blend of science fiction and alternate history”

He’s abducted by aliens to the planet Vost.

He’s saving up for his fare home.

In 1977 a New York Cab driver Mike Redolfo is abducted by aliens after being mistaken for a renegade scientist. Meanwhile, back in 1944 a mysterious man and his Jewish fiancée are fleeing across Nazi-occupied Europe.

Redolfo tries to keep a low profile on his new world whilst earning his fare home, but unwittingly gets involved with a shady gang of alien criminals, inadvertently bringing the planet to the brink of catastrophe.

As the link between the timelines becomes clear, Redolfo must discover secrets from the past that may hold the key to saving the planet.

Strangely, my most productive way of writing is either at my desktop or my notepad function on my phone. I’ve tried a laptop, but that seems too clunky by comparison. There is no way I could write with pen and paper because I change my mind too often and need a powerful editing function.

I write at weekends and every spare minute I have if there is a slow work day. I cannot bear to do nothing with my time. I seem to have lost the power to relax and empty my head. A friend said I should meditate. I just see that as a distraction from my productivity and creativity.

Coffee is the source of my power, not only in creative writing, but when I generate ideas. Coffee is the medium for bouncing ideas back and forth with friends and colleagues. I see drink also as a social bond. Lockdown has been a particular barrier to this, as my creativity stems so much from my interaction with people. Video links just don’t cut it.

I think that Tolstoy’s War and Peace must be one of my favourites. I read it initially for the ‘large book achievement factor’, but ended up falling in love with it. It assesses the human condition and intertwines it in a prose of philosophical thought and character analysis like no other piece of writing I’ve seen. It is written with such clarity and depth of feeling that I have not felt through any other book – at least not to this extent. Another favourite is Moby Dick, a work of such breath-taking genius, it is a masterpiece of literature.

I am currently writing an historical/romance fiction based in the Warsaw Ghetto. There is no science fiction. I have written a horror short story that was published online with Tigershark publishing https://tigersharkpublishing.files.wordpress.com/2020/07/tigershark-25a.pdf

I often base the characters, or elements of my characters on people I know, but sometimes I base them on people I would dearly love to know.

My favourite tool is the Color Note app on my phone. I always keep my phone with me, the app saves the notes to a cloud so they can’t be lost even if the phone is broken and I can’t read my own writing anyway!

There isn’t a genre I don’t like. I think of it like food, whichever type of cuisine it is, if it’s been prepared well with good ingredients, it’s all enjoyable. However, as with food, I like to vary the genres I read.

I co-wrote Space Taxis with my daughter, Harriet. We both came up with the idea at the same time. Having both of us on the project enriched the storytelling and the dialogue. We were lucky that we worked so well together. I am writing my current novel, however, on my own.

My current novel is based in the Warsaw Ghetto, so my next destination is Poland. I would be happy to travel to the ends of the Earth to ensure the story is an authentic representation of the history

Adam wasted much of his youth watching Star Trek on the TV and films like Planet of the Apes and Alien on the big screen. He redeemed himself by becoming a surgeon but has since graduated from writing articles for science journals into writing his own Sci Fi and Alternate History stories. As a writer he is dedicated to giving his readers a great story laced with strong, fun and scary characters. Descended from Jewish refugees who escaped from the pogroms, he is haunted by the stories of the Holocaust but inspired by heroes who put themselves at risk to save others. Adam likes to hear from his readers.

Harriet will never be able to let go of Greek gods. No, not the sculpted Adonis-like figures on the beach, but the ancient ones.
Loving all things mythological, her writing incorporates myths and legends from around the world. Her other fascination is with the criminal mind, and you can expect to see a blend of these two interests in her writing.
As a student of English, she spends her day critiquing literature and her evenings creating exciting characters and fun stories.
Harriet is also an artist, and she would like to hear from her readers and those interested in her art.