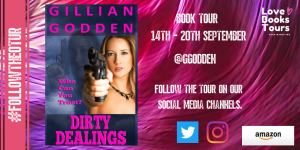 Tony Lambrianu might look like he’s sitting pretty, but when you’re the kingpin of a gangland empire you have to keep your guard up at all times. Deceit and betrayal lurk around every corner.

With threats looming from all sides, he is about to find out just who his real enemies are.

Meanwhile, Scarlet and Katie Lambrianu have their sights set on realising their own ambitions in life. They are determined to build their own empire and establish a Lambrianu legacy of their own.

Tony faces the biggest challenge of his life as he fights for personal survival and to protect his family. The danger comes from unexpected places. Will his empire crumble? It seems everyone is willing to resort to Dirty Dealings … how low will Tony go to avoid the devastating consequences of failure?

Dirty Dealings is the final instalment in this series. The other books, in order, are Dangerous Games; Nasty Business; and Francesca.

‘Scarlet! Scarlet, is that you?’ A man’s voice was shouting on the other end of the phone. She could hear it but didn’t have the strength to answer it.

Sitting in his office with Jake, Tony still held the telephone in his hand. He could hear a woman sobbing on the other end. His face paled as he looked up at Jake.

‘Come on, we have to go,’ he said and, picking up his jacket, he flew to the door.

‘What’s wrong? Where’s the fire?’ Jake looked at Tony oddly. ‘Who was that, Tony?’

‘Come on. I’ll tell you on the way. We have to get to Scarlet’s shop, we’ll use the back exit. Something’s wrong.’

He ran to his car, which was parked outside. ‘Take us to the shop, Mark,’ Tony snapped at his driver. His mind was whirling and panic rose inside of him. What had Scarlet said?

‘Calm down, Tony, are you going to tell me what all of this is about?’ Confused by this sudden panic in Tony, Jake waited for an explanation. He could see that something was very wrong and he was trying to gather his thoughts before speaking. No sooner had Tony answered the telephone than he had bolted for the door.

‘I don’t know what the hell is going on, Jake.’ Tony let out a deep sigh. ‘That was Scarlet and she just said she has killed a man. She said she is at the shop. That is all I know.’

Tony was shouting out of panic. The car wasn’t moving fast enough for him. All kinds of thoughts were filling his head.

‘She’s what?’ Confused, Jake asked again,’ Are you sure you heard her right?’ Stunned, Jake waited for more of an explanation but there wasn’t one. ‘If this is a fucking joke, Tony, I’ll kill her.’

My name is Gillian Godden an Indie author and a full-time NHS Keyworker at a local inner-city medical centre in East Hull, East Yorkshire, England. My patients come from all sectors of society and no two days are ever the same. My duty of care is to my patients and during the recent pandemic, a lot of frightened and lonely people have relied upon us at the medical centre to offer guidance and support. This year is the 72nd anniversary of the NHS and we do everything we can to support outpatients when they need us.

When I come home I like to wind down and writing is my escape from the mental stresses of my day. My job is not a 9 to 5 job and I work to support my patients when they need me so my days can be long.

The medical team at the surgery work together to support all our patients during their time of worry and need.

On a more personal note, I grew up in a large family and am the youngest of 7 siblings. Over the years we have lost touch as life moves on. I lived in London for over 30 years and during this time I worked in various London stripper pubs and venues. I have a grown-up son who now lives and works in London as a haematology lab technician. He has been working on the COVID 19 testing and this has been a worrying time for us as a family.

Once he left for University 5 years ago I had more time on my hands I was encouraged to write a short story by a local library book competition. First prize was a P&O cruise and 2nd prize was £50, I lost to a pigeon fancier and an addicted crocheter.

My NHS colleagues supported my writing and encouraged me to continue to write, however being a little green and naive I went with a Vanity publisher, much to my cost. This experience did give me a platform to showcase my first book Francesca on Amazon and in the online book clubs. I was totally overwhelmed by the response and people messaged me via social media wanting to know more about the characters and how Tony Lambrianu grew up and became so successful in the London Gangland crime world.

To answer their questions I went backwards in time and wrote Dangerous games and Nasty business. These also were successfully received by my now increasing readership, so in order to complete the series, I wrote Dirty Dealings.

My readers are still interested in the characters throughout my books and asked for more information on the lives of Julie and Ralph Gold, so as I do everything I can to support my patients in my NHS job I wanted to do the same for my readers, so I am now writing Gold, the story of Julie and Ralph. Although this is standalone book readers who have read all my other books will soon be able to find out more about Julie and Ralphs life and how they met